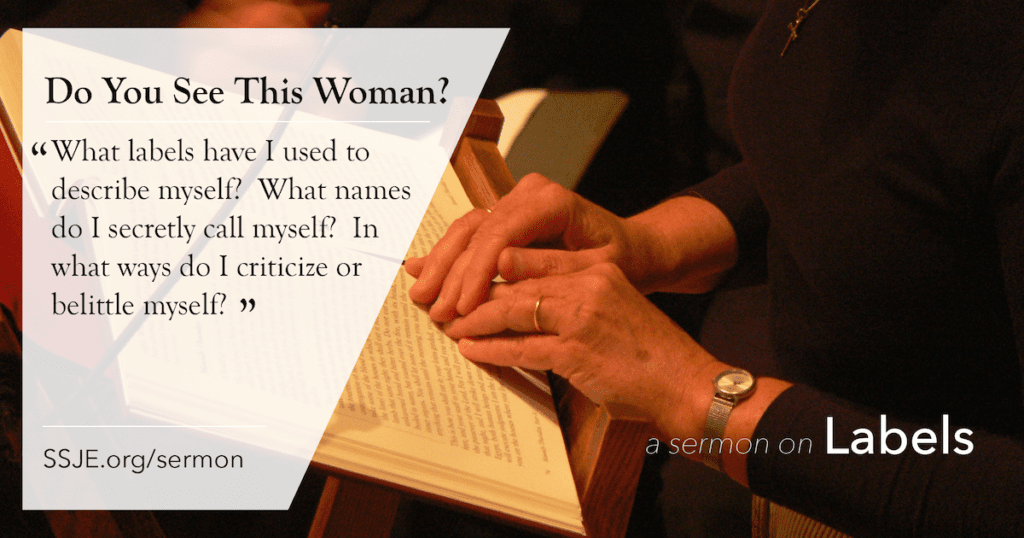 One day Jesus was invited to dine at the house of a Pharisee.  While they were at table, a woman “who was a sinner” entered the room with an alabaster jar of ointment.  She began to wash Jesus’ feet with her tears and dry them with her hair. Then she continued to kiss his feet as she poured the costly ointment over them.  We are not told who the woman was, or what had earned her the reputation of “a sinner,” or how she knew Jesus, or why she was weeping and anointing his feet.  The gospel writer records only her simple act of profound love and devotion.

The Pharisee objected mightily to this woman’s presence in his house.  He may have been irritated that she was distracting his guest and ruining his party.  But it’s more likely that he objected to her very presence.  He said to himself, “If this man were a prophet, he would have known who and what kind of woman this is who is touching him – that she is a sinner.”  For the Pharisee, that label had clear implications: it dictated how a righteous person would respond to her.  Certainly a teacher like Jesus should understand these important social norms. Not only would he not have let her touch him, he would not have interacted with her in any way.  To do so would compromise his own holiness. END_OF_DOCUMENT_TOKEN_TO_BE_REPLACED

Today’s Gospel is a story about contrasts.  We heard in Luke’s Gospel this morning that a Pharisee named Simon invited Jesus to eat with him.  A woman of that city came to that house with a jar of ointment and stood at Jesus’ feet, weeping and washing his feet with her tears, wiping them with her hair and anointing them. END_OF_DOCUMENT_TOKEN_TO_BE_REPLACED

In his Spiritual Exercises, the great 16th century saint and founder of the Jesuits, Ignatius of Loyola, employs a method of prayer in which one uses the imagination to envision the setting of a gospel story and then allows the story to unfold in his mind’s eye — observing the characters, their words and actions, and noticing particularly where one’s attention is drawn in the story. END_OF_DOCUMENT_TOKEN_TO_BE_REPLACED

Posted in Sermon and tagged Luke 7:36-50
Leave a comment
Scroll To Top