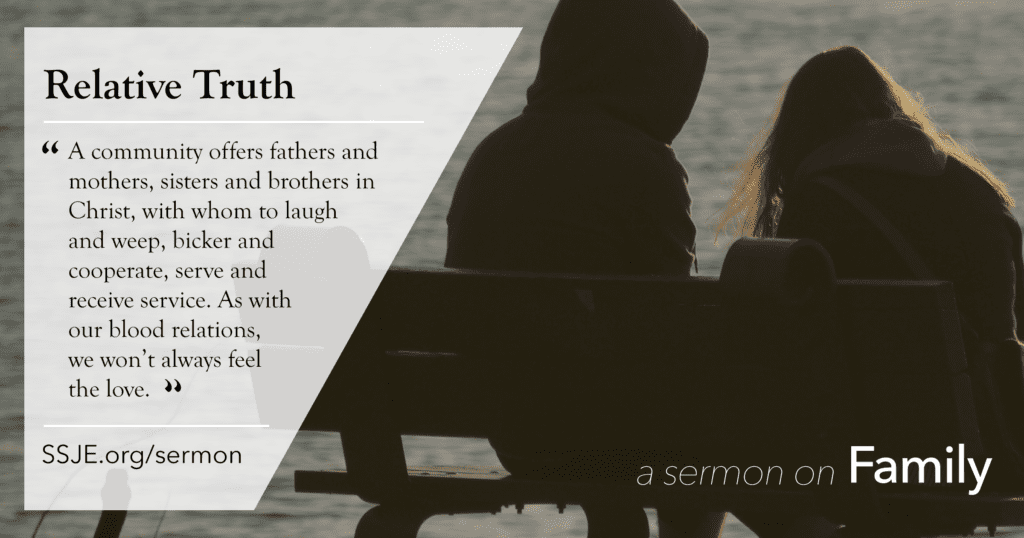 The Desert Fathers and Mothers were some of the earliest Christians to take up the monastic life. Among their recorded Sayings we find the following anecdote: A monk was told that his father had died. “Do not blaspheme,” he said to the messenger. “My Father cannot die.”[i] This reply, so seemingly hard and uncaring, is meant to shock our ears and awaken our spiritual curiosity. A relative bond – that between an earthly son and his now deceased father – is set in dramatic relief against an ultimate and indissoluble bond – the relationship between a child of God and his heavenly Father. The desert hermit to whom these words are attributed lived a rare and radical vocation, pursuing a way of life totally organized around this ultimate and indissoluble relationship. As a prophet of ultimate truth, his reply to the messenger jumps the tracks of conventional language, but his words do not negate the factuality of the messenger’s statement. Nor do they preclude feelings of loss or grief on the part of the monk. His reply, rather, holds those human realities in their proper, relative perspective – as small when compared to the greatness, the goodness, and the ultimacy of God.

In this evening’s passage from Luke, we encounter Jesus as the teller of Ultimate Truth in the midst of a world whose unquestioned logic, traditions, priorities and values are often myopically relative: concerned with things “passing away” rather than those “that shall endure.”[ii]  This short passage centers around the primacy of one’s family of origin and its power to determine a person’s ultimate loyalties and alliances in Jesus’s time. Jesus has just finished a lengthy discourse including both public teaching to the crowds and a private teaching to his disciples on the purpose of parables. It is a lengthy exposition of ultimate truths. Jesus is then told that his mother and brothers are standing outside, wanting to see him. This appearance of Jesus’ family at the edge of a crowd and at the conclusion of a teaching discourse is an event recounted in Matthew and Mark as well. END_OF_DOCUMENT_TOKEN_TO_BE_REPLACED

Today’s Hebrew Scripture lesson from the scribe Ezra describes the decrees of good King Darius and the search for documentary evidence concerning the First Temple and its records.  The Third Temple, built by Herod and in its final construction stages in Jesus’ time, is said to have contained tens of thousands of genealogical records.  After the Babylonian exile, there was an almost obsessive preoccupation with proving the purity of one’s family bloodlines.  Many of Jesus’ Jewish contemporaries searched these records in their effort to demonstrate their good standing in the post-Exilic community.  Galilean families, living in a mixed Gentile- Jewish area and often marginalized by the Judean elite centered in Jerusalem seemed to have been particularly intent in proving their connection to this community and as we know, Jesus was a Galilean. END_OF_DOCUMENT_TOKEN_TO_BE_REPLACED