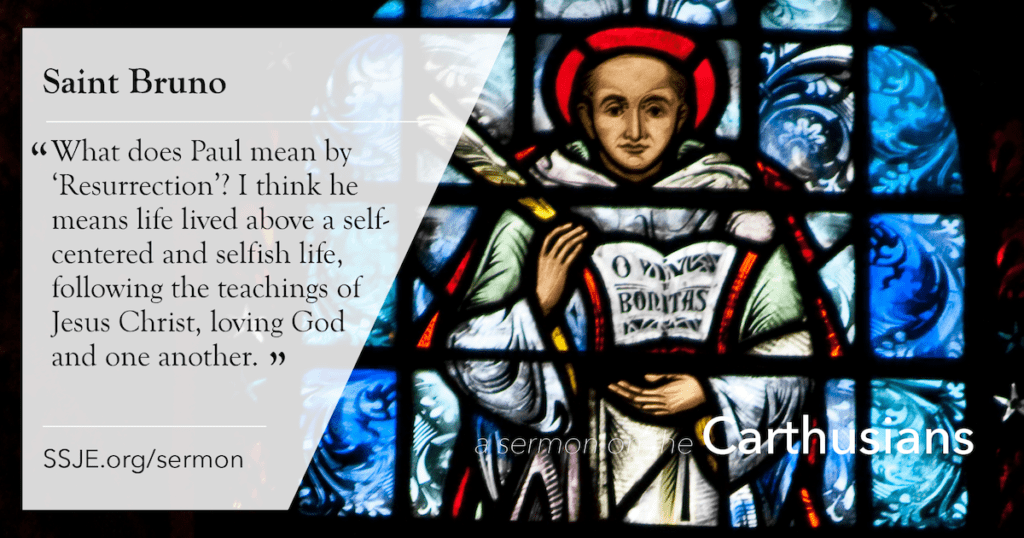 The Eucharist today commemorates Saint Bruno, the Founder of the Carthusian Order, founded in 1084 A. D. In this Chapel he is depicted in the windows just above us, the last one on the North Side, nearest the Altar. Bruno was born in Cologne about 1032.  He was gifted intellectually, and became rector of the Cathedral School at Rheims. After about 18 years in that position of great responsibility Bruno began to feel drawn to the monastic life. END_OF_DOCUMENT_TOKEN_TO_BE_REPLACED

“No one who puts a hand to the plow and looks back is fit for the kingdom of God.”  Jesus is fond of earthy, agricultural imagery. I think the idea here is that if you are trying to plow a furrow in a nice straight line and look back over your shoulder, you’re going to mess it up.  Like trying to drive a car while looking through the rear view mirror. The Kingdom of God is something out there ahead of us, and to get there we need to keep looking ahead of us—sometimes even at the far horizon. END_OF_DOCUMENT_TOKEN_TO_BE_REPLACED

Jesus’ responses to those who said they would follow him that we heard in today’s Gospel have sometimes made me uncomfortable.  They can seem abrupt or off-putting.  We usually think of Jesus speaking to people with compassion.

As I meditated on it, I realized that there must have been reasons for such responses.  END_OF_DOCUMENT_TOKEN_TO_BE_REPLACED

Today we celebrate the Feast of St. Bruno, founder of the Order of Carthusian Monks.  Little is known of his childhood, except that he was born in Cologne in 1032.  After ordination he became the highly respected Rector of the Cathedral School at Rheims.  In 1075 he was appointed Chancellor of the Diocese of Rheims.  In addition to this Pope Urban II, who had been one of his students at the Cathedral school in Rheims, appointed him as his advisor.  In 1084 Bruno and six of his companions began to feel the call to the monastic life.  For a short time he and his companions lived with Saint Robert and a few others who eventually founded the Cistercian Order, but Bruno and his companions decided instead to found a more austere order.  They settled in 1084 at Chartreuse, near Grenoble and followed an ethos inspired by the ideals of the primitive monasticism of the 3rd and 4th centuries of the desert monks in Egypt.  Their ethos centered on silence, austerity and total renunciation of the world.  Similar to the early desert monasteries Bruno and his companions chose to live in small hermitages within the monastery complex, and came together for prayer and on greater feasts for some of their meals, as Carthusian monks do today.  Bruno died on this date in 1101. END_OF_DOCUMENT_TOKEN_TO_BE_REPLACED