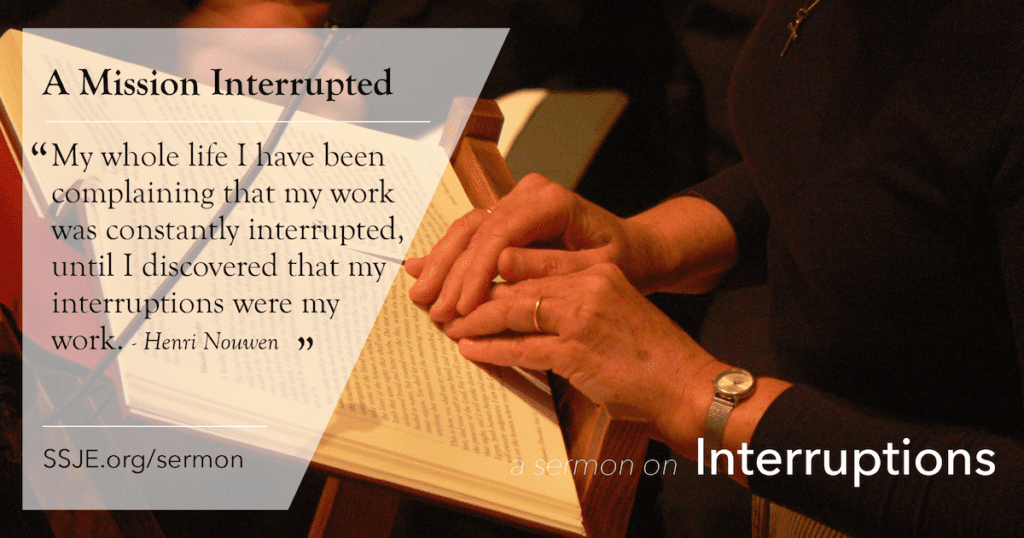 You might have noticed that the gospel story read this morning contains two healing miracles, not one.  What makes them particularly interesting is that they are interwoven – in fact, one story interrupts the other.

We find Jesus surrounded by “a large crowd” just after his return from a healing mission that had taken him across the Sea of Galilee.  A man approaches him – not just any man, but a leader of the synagogue, a person of considerable social status and importance.  He is desperate with worry and grief and, abandoning all dignity, he falls to the ground at Jesus’ feet and “begs him repeatedly,” the gospel writer tells us,to come and lay his hands on his sick daughter, who is at the point of death.  There is a mixture of desperation and hope in his eyes.  He is convinced that Jesus has the authority to make her well, if only he will come, and quickly.  So Jesus went with him.  The crowd followed.

On the way a curious thing happens.  Jesus suddenly stops and looks around.  “Who touched me?” he asks.  This strikes even his own disciples as an odd question, given that throngs of people are surrounding him and jostling against him.  But he is “aware that power had gone forth from him” and he wants to know to whom it has gone.  There is a pause, until a woman slowly comes forward and admits that it was she who reached out to touch his robes.  Her situation is similarly desperate.  The gospel writer Mark underscores the seriousness of her case by telling us that not only had she been suffering from hemorrhages for twelve years, she had “endured much under many physicians, and had spent all that she had, and she was no better, but rather grew worse”!  Unlike Jairus, the man whose daughter was gravely ill, she has no high social standing. Her disease has impoverished her and isolated her; anyone coming into contact with her would have been rendered ritually impure.  For twelve years she had been in pain physically and ostracized socially! It is no wonder that she took the risk she did in reaching out to touch the man of God. END_OF_DOCUMENT_TOKEN_TO_BE_REPLACED

It’s been quite a week. It’s been quite a week and, no doubt there is more to come. We have seen protests, demonstrations, and acts of witness, support and solidarity. We have seen millions in this country and around the world on the streets, in airports, in front of hotels all voicing their concern, their objections, and their resistance. It’s been quite a week, and there promises to be more to come. It seems that there is a new normal taking root, not just in this country, but around the world. My hunch, and it’s only a hunch, is that what we have seen in the past week, is what the next four years will be like, so we had all better get used to it.

For us a Christians as we watch the news, read the newspapers, talk with our friends and neighbours the questions at times like these is always: “should the Church be involved? Should the Church ever be involved?” There are those among us who would argue that the Church should stay out of politics; that the Church should never take a stand on this issue or that; that the Church must limit itself to the spiritual realm and leave the temporal realm alone. There are those who would argue that Jesus was not political; that he came to establish a heavenly kingdom and not an earthly one; that he opposed the mixing of the things of God with the things of Caesar, and so should we. END_OF_DOCUMENT_TOKEN_TO_BE_REPLACED

A miraculous healing; a miraculous raising from death…  I’m not always quite sure what to make of these healing stories—sometimes they raise more questions than they answer. What did Jairus’s daughter die from the second time around?  What was the final illness for the woman with the hemorrhage—something caused her eventual death, even though she had once been healed by Jesus. How many people did Jesus actually heal?  Why didn’t he just waive his hand over the whole earth and heal all people everywhere?  Why Jairus’s daughter and not his neighbor’s? What does it mean that Jesus can heal and sometimes does—and sometimes doesn’t ?  Perhaps you’ve experienced healing in a way that you know was a special grace—it happens.  But, as we all know, no one gets out of this alive. Even Lazarus, raised from the tomb, died again. END_OF_DOCUMENT_TOKEN_TO_BE_REPLACED