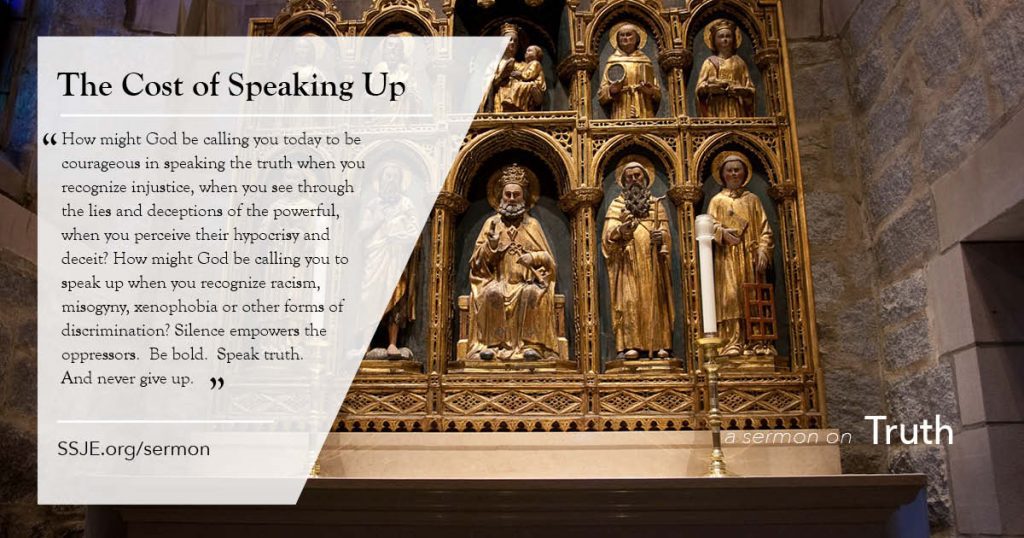 The Beheading of John the Baptist

We have a powerful example of this in tonight’s gospel lesson, which presents us with a shocking contrast.  On the one hand there is the prophet John, the “voice crying in the wilderness,” now alone in his cell, doomed and helpless to save his life; on the other, the king, surrounded by the ‘successful’ and powerful members of his court.  John is in prison because he has dared to criticize Herod for marrying his brother’s wife; he is paying a heavy cost for speaking the truth. END_OF_DOCUMENT_TOKEN_TO_BE_REPLACED

The story of Alban is worth recounting.  Alban was a Roman soldier in the early 3rd century, stationed in Verulamium, about 20 miles north of London.  Although he was a pagan, he agreed to give shelter to a priest who was fleeing persecution.  Moved by observing the priest at prayer, he asked the priest questions about his faith and was converted.

The Roman authorities received a report that Alban was sheltering the priest.  When soldiers were sent to Alban’s home, he greeted them at the door disguised in the cloak of the priest, and willingly gave himself up to be arrested.  He was brought before the military governor, who soon discovered the ruse.  The governor commanded Alban to offer sacrifices to the Roman gods, and when Alban refused, had him tortured and put to death that same day.  Tradition has maintained that the year was 303 or 304, but recent scholarship has placed Alban’s martyrdom a century earlier, in the year 209, during the persecutions ordered by the Emperor Septimius Severus.

Certainly the sacrifice of Alban is worth remembering today.  We recall with awe his unwavering commitment to Christ, a commitment that prompted him to give himself up to torture and death in place of a Christian priest.  Jesus said, “No one has greater love than this, to lay down one’s life for one’s friends” (John 15:13).  We stand in awe of the unflinching witness of the martyrs and pray that, if that day should ever come to us, we would be equally steadfast and fearless in the profession of our faith in Jesus Christ.

But today I want to highlight as well the witness of the anonymous Christian priest.  It was his quiet example and the genuineness of his prayers that inspired Alban to embrace the Christian way.  Like Alban, he never abandoned his commitment to Christ, even though his life was constantly in danger.

It seems unlikely that any of us will ever be called to suffer torture and death because of our Christian faith, but it is very well possible that our quiet, steady, unwavering commitment to Jesus Christ may inspire in others a curiosity and a desire to understand and embrace this faith.  It is entirely possible that the way we live, the way we speak, the way we serve, the way we love and honor one another and those whom we meet, may inspire someone we hardly know to seek God by exploring the Christian way.  We should be mindful, then, day by day and hour by hour, of our unspoken witness – the way we live our lives – and its power to change and inspire those around us.  May God give us grace to live as these two men lived – fearlessly, humbly, and gracefully – so that our lives, by showing forth God’s beauty and truth, may draw others to new life in Christ. 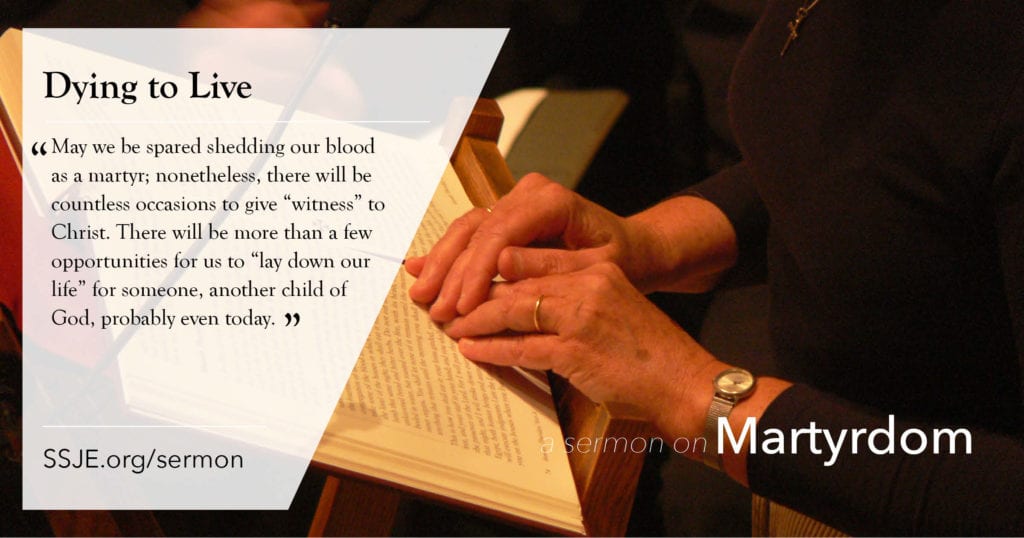 The scholarly journal, the “International Bulletin of Mission Research,” has for more than thirty years compiled an annual table of Christian martyrs. The journal defines martyrs as “believers in Christ who have lost their lives prematurely, in situations of witness, as a result of human hostility.”

Martyr. The journal’s estimate: in the last 10 years, 900,000 Christians have been killed worldwide for their witness to Christ. That’s, on average, 90,000 Christians martyred each year during this past decade.[i]

The English word “martyr” comes from both Latin and Greek, the word “martyr” translated as “witness.” May we be spared shedding our blood as a martyr; nonetheless, there will be countless occasions to give “witness” to Christ. There will be more than a few opportunities for us to “lay down our life” for someone, another child of God, probably even today. The invitation may not be in an act of heroism – no shedding of blood – but more likely in a very mundane and rather hidden way.

Certain people who – as we say – absolutely “kill us,” we will have the occasion to show kindness or to forgive. We will be invited, undoubtedly, to offer the generosity of our tried patience; the withholding of our judgment; the readiness to be helpful and not hurtful, or retiring or rebuffing; the opportunity to bless and not to curse. Not everyone, we pray, will face John the Baptist’s fate; but all of us who profess Jesus as our Lord and Savior will be invited to die more than once, maybe more than once even today. To die. Jesus said, “unless a grain of wheat falls into the earth and dies, it will not bear fruit.”[ii] We’re to be fruitful. Something will need to die for us to be fruitful. Whether it be something great or something puny that we are sorely tempted to clutch at and save at all costs may need to die. It may be some image of ourselves, some impression, or decision, or resolution, or privilege, or fear, or time that we feel is our rightful possession. It’s going to get in the way of life, what Jesus calls “abundant life,” if we don’t let it go, don’t surrender it, don’t let it die.[iii] Today will probably be a “killer” in the working out of our salvation and in our claiming the “abundant life” promised by Jesus.

In the SSJE Brothers’ Rule of Life, we speak of our identification with martyrdom, not because we are monks, but because we are baptized. In our baptismal vows, we profess that we “have died with Christ and are raised with him.” Jesus promises us resurrection power. We have to die before we rise, before we can claim his resurrection power. Die, again, and again, and again, we must die. 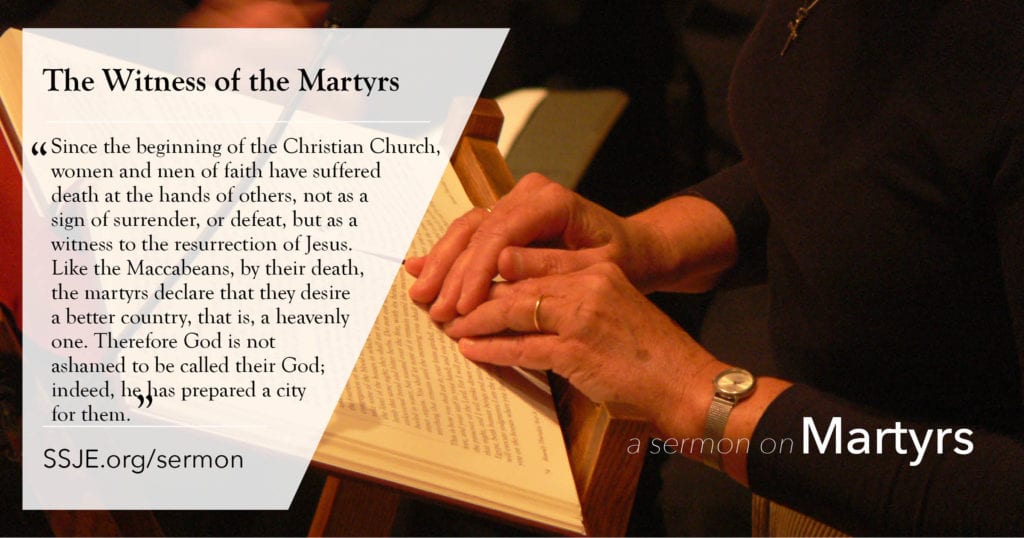 If some of you are scratching your head, feeling a little deja vu all over again, as some comic put it, there’s little wonder. We have been hit this past week with a double dose of Maccabees[1], and today that double dose is doubled, by the fact that we read, more or less, the same lesson at Morning Prayer[2], as we have just heard here in the Eucharist. So no, you’re not dreaming, and no the reader did not make a mistake. We actually did read portions of 1 Maccabees for the second time today.

So what is it with all this Maccabees stuff?

In a nutshell Israel and Judea have been occupied once again by Gentile forces. Observance of the Law has been banned. Circumcision has been outlawed. Jews are forced to eat pork. The Temple, as we heard at Morning Prayer, has been desecrated. But a small band of faithful Jews, led by Judas Maccabeus, rise up in revolt, push back the Gentile forces, rededicate the temple, as we have just read, and re-establish Jewish worship and customs. It is out of this story that comes the Feast of Hanukah, which Jews keep to this day.

What captured the imagination of the early Church, as well as people of faith on both sides of the Reformation divide, was the story of the woman with seven sons described in 2 Maccabees 7. In this story a mother of seven sons is forced to watch, as each of her sons, one after the other is tortured, and killed, for refusing to abandon the Law and eat pork. Some point to this story as the source for Hebrews 11: women received their dead by resurrection. Others were tortured, refusing to accept release, in order to obtain a better resurrection.[3] It is the steadfastness of the mother, and the courage of the sons, that holds our attention. Do not fear this butcher, she exhorts one son. Accept death, so that in God’s mercy I may get you back again along with your brothers.[4]

It is this faithfulness in the face of torture, and death, as a witness to the resurrection that makes the story of the Maccabeans, not simply a curious appendage to Scripture, but a pattern of life for people of faith.

We say in our Rule of Life that [the] grace to surrender our lives to God through our vows has been given to us in Baptism whereby we die with Christ and are raised with him. It is the same grace that gives strength to martyrs to submit gladly to death as witnesses of the resurrection. From the beginning monks and nuns have been encouraged to understand their own commitment in the light of the freedom and trust that enables martyrs to give up their lives to the glory of God. The witness of the martyrs should never be far from our minds as we go forward in the vowed life day by day.[5]

And that is why we should care.

Since the beginning of the Christian Church, women and men of faith have suffered death at the hands of others, not as a sign of surrender, or defeat, but as a witness to the resurrection of Jesus. Like the Maccabeans, by their death, the martyrs declare that they desire a better country, that is, a heavenly one. Therefore God is not ashamed to be called their God; indeed, he has prepared a city for them.[6]

As followers of Jesus, our witness is to his resurrection. For most of us that witness is the witness of baptism, whereby we die daily to our sin and pride, so that we may rise in Christ. For some of us, it will mean giving up our lives to the glory of God. In either case we do so in the confidence of a sure and certain hope of the resurrection to eternal life through our Lord Jesus Christ,[7] as we say in the burial rite, and that’s why we should care about the Maccabeans today.

[1] The First Lesson at both Morning Prayer and the Eucharist this week (Proper 28) have been readings from 1 and 2 Maccabees.

There are a few of us in the community who will remember, and there may be others of you who will have heard the story, probably countless times, of how our brother Tom, when he was the Superior, used to pray at the Mid-Day Office for the gift of martyrdom to be given to our community. Some of us were quite ready to grant him his prayer, and make him the first official martyr of the Society. (As an aside, I say official martyr, because while the African martyr Bernard Mizeki was not a member of our community, he was certainly a product of our Society, as he was: introduced to the Christian faith; prepared for baptism; trained as a catechist and sent out on mission where he was later martyred, by members of our community in South Africa. Because of that, I like to think of him as our martyr.)

We say in our Rule of Life in the chapter on Life Profession that the grace to surrender our lives to God through our vows has been given to us in Baptism whereby we die with Christ and are raised with him. It is the same grace that gives strength to martyrs to submit gladly to death as witnesses of the resurrection. From the beginning monks and nuns have been encouraged to understand their own commitment in the light of the freedom and trust that enables martyrs to give up their lives to the glory of God. The witness of the martyrs should never be far from our minds as we go forward in the vowed life day by day.[1] END_OF_DOCUMENT_TOKEN_TO_BE_REPLACED