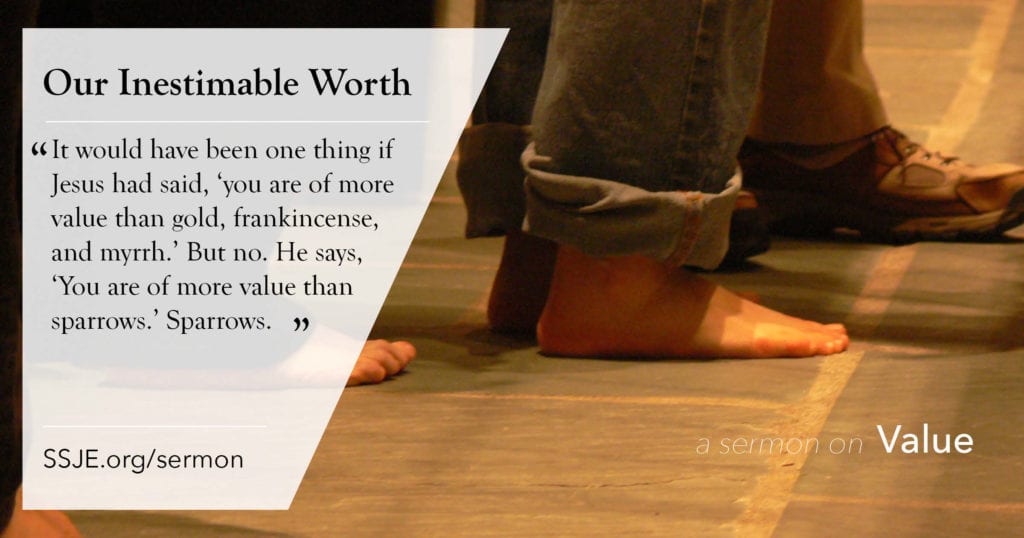 If I were to tell someone how much they mean to me, and I said to them, “You, my dear friend, are more important to me than sparrows.” I think this friend would be nonplussed. Probably offended. Deeply. So what’s going on with Jesus’ rhetorical question, “Are you not of more value than many sparrows…?”

It’s worth considering the value of a sparrow in Jesus’ day. In Jesus’ day, when making an offering at the Temple in Jerusalem, the poorest of the poor could not afford the offering of a lamb; they brought sparrows. Two sparrows were sold for one Roman penny. Two pennies made farthing. A farthing was 1/64 of a denarius. And a denarius was the average laborer’s wage for one day. So a common laborer’s daily wage would buy about 130 sparrows. It would have been one thing if Jesus had said, “you are of more value than gold, frankincense, and myrrh.” But no. He says, “You are of more value than sparrows.” Sparrows.

On August 20, 1965, Jonathan Myrick Daniels, an episcopal seminarian, did an amazing thing.  When confronted by a white man with a 12 gauge shot gun, Jonathan jumped in front of 16 year old Ruby Sales, an African American woman from Alabama, and absorbed the bullet meant for her at point blank range.  He died.  This is amazing, but not extraordinary.  Most people who have been donned a ‘hero’ usually shrug off the title saying that they reacted to a situation by instinct and not by any heroic rationale.  Had he lived, perhaps Jonathan would have said the same of his behavior in the face of violence.

Like many of us, Jonathan struggled with his sense of vocation.  He graduated from Virginia Military Institute and attended Harvard for graduate school but when it came to what he wanted to do with his life, he felt lost, juggling the possibilities of being a lawyer, doctor, or writer.  Then on Easter Day in 1962 while attending a service at the Church of the Advent here in Boston, Jonathan heard the still small voice of God calling him and immediately knew in his heart what he must do.  He soon entered what is now the Episcopal Divinity School to pursue ministry.  Three years later, inspired by the words of the Blessed Virgin Mary in the gospel of Luke (He has cast down the mighty from their thrones, and has lifted up the lowly.  He has filled the hungry with good things….)[i] and also by words of Dr. Martin Luther King, he asked for leave from seminary to go to Selma, Alabama to help in the Civil Rights Movement.  He wrote:  “I knew that I must go to Selma.  The Virgin’s song was to grow more and more dear to me in the weeks ahead.”[ii] END_OF_DOCUMENT_TOKEN_TO_BE_REPLACED

For several years after college I worked for an international development and relief organization.  We provided medical supplies and expatriate staff for hospitals in 80 or so of the economically-poorest countries of the world.  My work was in personnel, which included preparing and orienting our medical workers for what they would encounter in their host culture.  We always told them in great detail the worst they would likely experience: the extremes of the weather, the meager diet, the primitive sanitary conditions, the political tensions with the host government, the competition among various religious and political groups in their area, the lack of privacy, the prospect of their becoming sick, the homesickness and loneliness they would feel, the possible strains on their family, the desperate need for their work… and the haunting guilt they would probably feel being such privileged people in the face of such great poverty.  END_OF_DOCUMENT_TOKEN_TO_BE_REPLACED