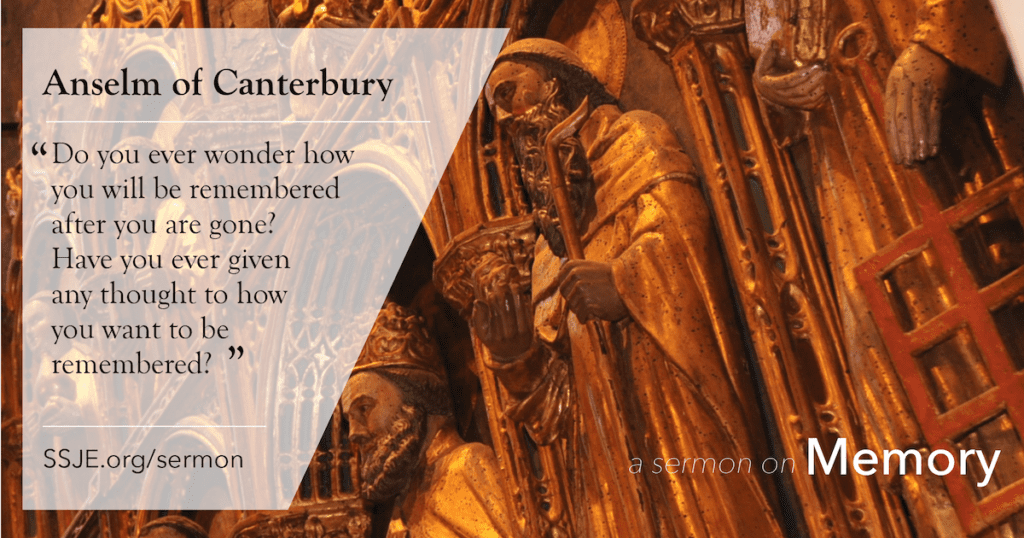 Do you ever wonder how you will be remembered after you are gone?  Have you ever given any thought to how you want to be remembered?  Someone has said that what people will remember about us is not so much what we said and did, but how they felt when they were in our presence.

Today we remember one of the Church’s great theologians, Anselm of Canterbury. Anselm was born in northern Italy in 1033.  He was intellectually curious, but also devout.  At the age of 17, he entered the Benedictine abbey of Bec in Normandy and gradually grew in reputation and status until he became its Abbot.  After a long and memorable tenure as Abbot of Bec, Anselm was pressured to become the Archbishop of Canterbury when he was about 60 years old, a position he embraced reluctantly but in which he was very effective.

Anselm is best remembered as a brilliant theologian, and primarily for two important works:

He was an exponent of what was called the “ontological” argument for the existence of God and posited that God is “that than which nothing greater can be thought.”  Since the greatest thing that can be thought must have existence as one of its properties, Anselm argued that God exists and is not dependent upon the material world for verification. END_OF_DOCUMENT_TOKEN_TO_BE_REPLACED

In the calendar of the Church, we remember today Saint Francis of Assisi, born in year 1181. In the Middle Ages, in Saint Francis’ day, the disease of leprosy, the oldest and most dreaded of all diseases, was a terrible scourge.  Lepers would be seen with the most hideous of skin ailments: sores all over their bodies; bones protruding; eyes forever draining: wounded people, broken down, festering, stinking.  A leper died a slow, repulsive, ignominious, lonely death.  And yet the source of a leper’s problems was not with their skin or bones.  Those merely showed the symptoms.  The problem with leprosy is with the nervous system.  The nerves become deadened to any feeling.  The nerves sense nothing in the affected area.  And as the disease would spread through the body, the person would not be able to feel anything in the affected area.

A person with leprosy affecting their hand would be working using, for example, a broom or garden trowel with a splintered handle.  They might tear their hand but not feel it, not know it, and a resulting infection would settle into this lame hand. END_OF_DOCUMENT_TOKEN_TO_BE_REPLACED

Nestling in a verdant Norman valley, surrounded by meadows and apple orchards, between Rouen and Lisieux, stands the famous Benedictine abbey of Le Bec Hellouin.  In my early twenties I would often go to Le Bec for my retreats.  I remember the first thing you would see in the distance – the tall, beautiful, creamy stone church tower of St. Nicholas, welcoming you into the valley.  I loved the singing of the monks, I loved my conversations with the abbot about monasticism, and about my vocation.

Le Bec Hellouin also has very close historical ties with the Church of England, and in particular with Canterbury Cathedral.  The reason for this is primarily because not one, but two of its abbots went on to be Archbishop of Canterbury.  First, Lanfranc, and then in the year 1093, Anselm, whom we remember today. END_OF_DOCUMENT_TOKEN_TO_BE_REPLACED

Francis of Assisi (1181-1226) was a witness to Christ in ways beautiful, charismatic, and extreme. He was a person of deep prayer and great compassion. He lived in an age of tremendous suffering, systemic corruption, and voracious spiritual hunger. He greeted these opportunities with courage, the unquenchable power of love, and a pal­pable freedom of the Spirit. He saw himself and his followers as “God’s jug­glers,” mediating reconciliation within a divided church and witnessing to Christ’s joy to revive the hearts of the faithful. END_OF_DOCUMENT_TOKEN_TO_BE_REPLACED