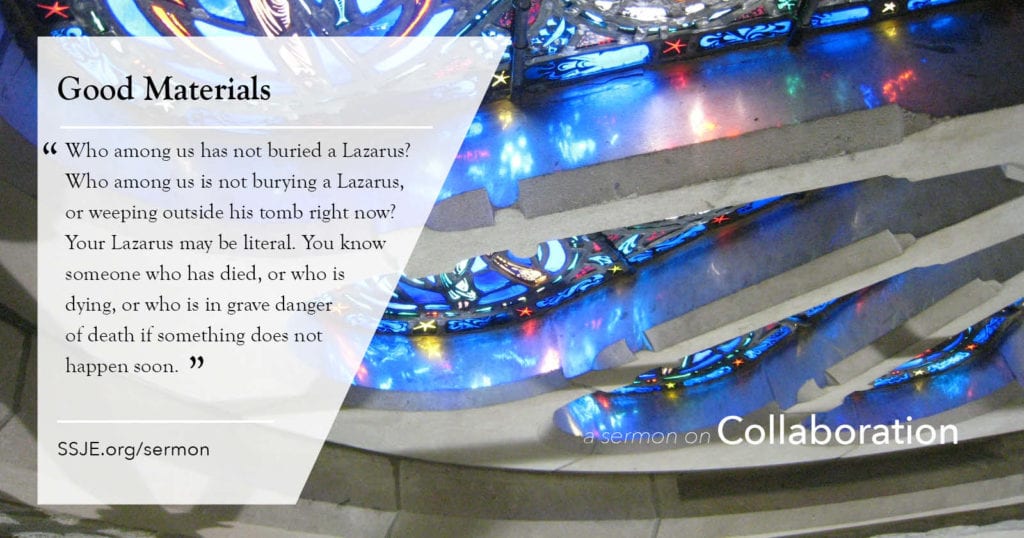 At various points in my life I have learned things about the artistic process from people who are genuine masters. As a student and an amateur (that is, a non-professional lover of art) I have admired several traits that masters seem to have in common, especially when they have swooped in and lovingly rescued my work from disaster. A master of any art will not let her media dictate the results of her intended project. Neither, having painstakingly chosen her materials, will she forsake the medium and its potential if it proves sub-optimal once the artistic process has begun. A master has the training, the inner resources, the perspective, and the tools to respond and to adapt, to re-calibrate his vision and expectations if the block of marble or batch of gesso or piece of wood reveal faults or surprises. This is a powerful and mysterious dance to witness: the artist’s respect for the material calls forth a genuinely two-sided conversation. If the student is too deferential or too dominating toward the materials (and I have been both), the result is either a monologue or an argument. Neither produce good art.

END_OF_DOCUMENT_TOKEN_TO_BE_REPLACED 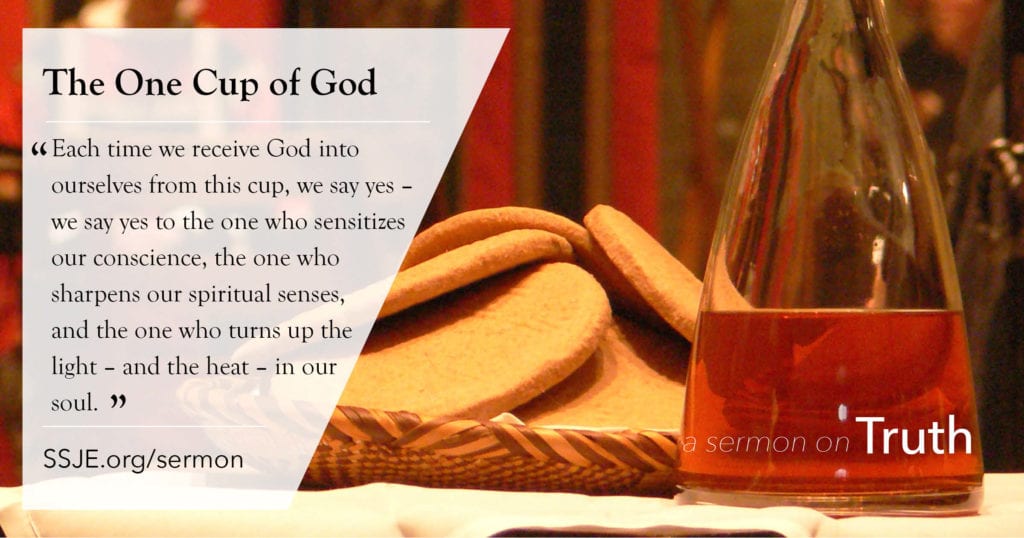 Matthew 20:17-28
For in the LORD’s hand there is a cup, full of spiced and foaming wine, which he pours out, and all the wicked of the earth shall drink and drain the dregs.

In the writings of the prophets Jeremiah, Ezekiel, and Isaiah, as in the seventy-fifth Psalm, we encounter a cup that no one wants to drink. All tremble when God offers it. And for good reason. To “drink the cup of God’s wrath” is to imbibe the consequences of ungodly actions. Those who drink it stagger and fall down, overwhelmed by the awful knowledge of their sins.

These images of forced intoxication are harsh and terrifying. They feel punitive in the extreme. But to see this image from the vantage point of the prophets of Israel, to drink this cup is also to swallow the Truth. If we have developed a personal habit of avoiding or evading the Truth; if we have fallen captive to our culture’s prevailing tendency to do this on a national scale; if we have lied to ourselves or others; or if we have done things that feel untrue to our primary identity as God’s children; the Truth may very well feel harsh and terrifying. When God offers this cup to me, it inevitably feels like a confrontation.

The same God of Truth also offers the cup of blessing. For those who are living in the Truth, living for the Truth, to drink of this cup brings life and health, strengthening one’s intimacy with the God who offers it. This cup purifies the heart and prepares our thirst for more and more.

But what if this is the same cup? It is obvious that the biblical writers are using the image of God’s cup to convey a wide variety of different meanings. But might it be the case that, rather than selecting a different cup from a divine cup collection or even pouring a different vintage of wine for each guest, God offers God’s one cup – the offer of Godself? Might it not be that the disposition of the one who would drink of itis the variable here, and it is we – who can see so little of the vast and inscrutable purposes of God – who attribute to God a variety of motives beyond the one motive of saving Love?

Jesus was steeped in the tradition of the Prophets and in the prayer book of Israel, the Psalter. He would have known this variety of cup imagery in scripture quite intimately. When Jesus says to James and John, “Are you able to drink the cup that I am about to drink?” he has just offered to his disciples a third prediction of the suffering and death he is to undergo at Jerusalem, as well as a prediction of his resurrection. This is a cup of Truth so pungent and bewildering that they have avoided and evaded drinking it at all costs. And in just a few short chapters, Jesus will drink from a cup for the last time with his gathered friends, saying “Drink from it all of you; for this is my blood of the covenant, which is poured out for many for the forgiveness of sins.” And he will go to Gethsemane and pray in the dark, “If it is possible, let this cup pass from me; yet, not what I want, but what you want.” The cup of Jesus is one cup. For him and in him, the cup of suffering is the cup of salvation. The cup offered to him and him alone by the hand of his Father isthe cup he invited his friends to share at their final feast. If James and John would drink the cup of blessing in the right hand of the king, they must drink all the Truth that that cup contains. And so must we.

The chalice of the Eucharist participates in the nature of all of these offered cups, which are the one cup – the offer of Godself. The bread and wine of the Eucharist are many, many things: food for our wilderness journey, medicine in this hospital for sinners, fruit hanging from the tree of the cross. But for me, a challenge – and some days, a confrontation– in receiving the Eucharist as frequently as we do is that the cup we drink also holds living fire. This image is especially prominent in the Eucharistic prayers of the Eastern Church, in which the bread is likened to the live coalfrom the altar that touched the lips of Ezekiel, and the wine a flow of living firefrom God’s throne. Such fire burns up sins, and sets the soul ablaze like molten metal. The heat that sometimes burns in my breast in response to this fierce gift finds poignant expression in the words of the Carmelite writer Marc Foley: “The deeper divine charity takes root in our hearts, the greater the guilt we feel when we hate or fail to love. The more we say yes to God, the more painful it becomes to say no. Nevertheless, we continue to resist God’s call to grow. Consequently, we feel trapped. We can’t say no, but we don’t want to say yes. We resent being put in this position.”

Each time we receive God into ourselves from this cup, we say yes– we say yesto the one who sensitizes our conscience, the one who sharpens our spiritual senses, and the one who turns up the light – and the heat – in our soul. The cup of Truth may cause us to stagger and fall down. But if we continue to drink from it – Christ promises – this loving confrontation will bring us to a miraculous and sober inebriation. We will know that fire can make its home in us, because our true nature is gold. The cup of his suffering – which is the cup of salvation – will bring with it each day a fresh opportunity to turn to the Lord and live. In this cup, we will know the Truth without fear, and the Truth will set us free. 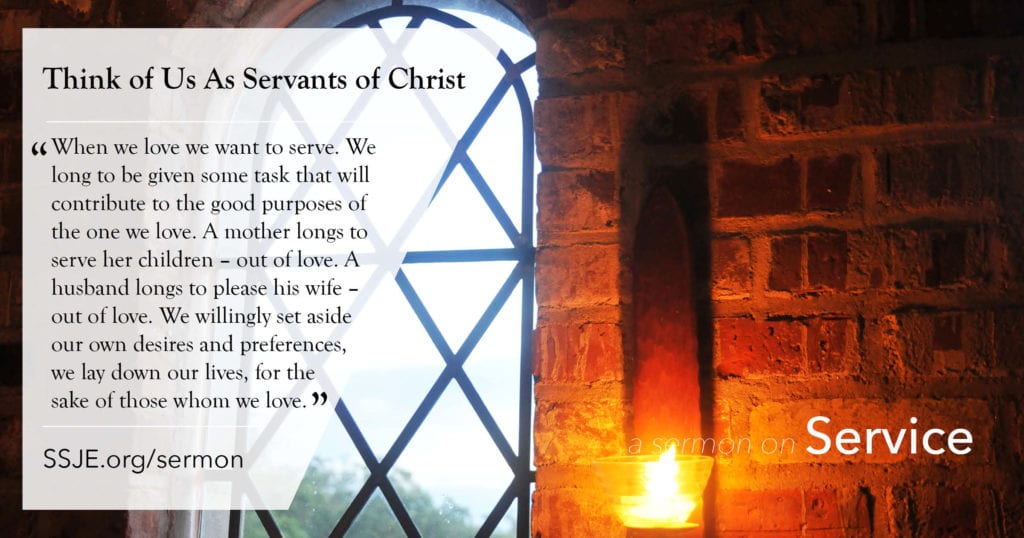 What comes to mind when you hear the word “servant” or “slave”?  Most of us imagine a person who is not free to do what he pleases, one who lacks the power or freedom or resources to direct his own life, one who must work to fulfill the desires of another. We think of a servant or slave as powerless in relation to his superior. His station in life demands that he constantly set aside his own desires to fulfill the desire of his master. For most of us, it is not an enviable position. How many of us would willingly sacrifice our independence and autonomy to become the slave of another person?

And yet this is what Jesus asks of his disciples, that they imitate him as one who “came not to be served but to serve, and to give his life a ransom for many” (v.28).

In his letter to the Christians at Corinth, St Paul writes, “Think of us in this way, as servants of Christ and stewards of God’s mysteries. Moreover, it is required of stewards that they be found trustworthy.” (I Cor. 4:1,2)  “Think of us in this way,” says Paul, “as servants of Christ.” He says this with pride, not shame. He is not embarrassed that he has been reduced to the role of a servant; he does not regret that he is no longer free to do his own will and is compelled to do the bidding of another. Nor is there any suggestion that he has been forced to become a servant – in fact, the opposite is true: Paul has voluntarily chosen to take up this role. He sees it as a glorious privilege to be considered a servant of Christ. He sees it as a blessing to live no longer for himself, but for Christ. He is honored to have been entrusted with divine mysteries, and feels both an obligation and a desire to be found trustworthy in this responsibility. END_OF_DOCUMENT_TOKEN_TO_BE_REPLACED

What comes to mind when you hear the word “servant” or “slave”?  Most of us imagine a person who is not free to do what he pleases, one who lacks the power or freedom or resources to direct his own life, one who must work to fulfill the desires of another. We think of a servant or slave as powerless in relation to his superior. His station in life demands that he constantly set aside his own desires to fulfill the desire of his master. For most of us, it is not an enviable position. How many of us would willingly sacrifice our independence and autonomy to become the slave of another person?

The mother of the sons of Zebedee is surely one of the sketchiest personalities in the Bible.  We have exactly two dots to connect. She appears briefly here in the stock role of the ambitious mother and then once more later—that’s it.