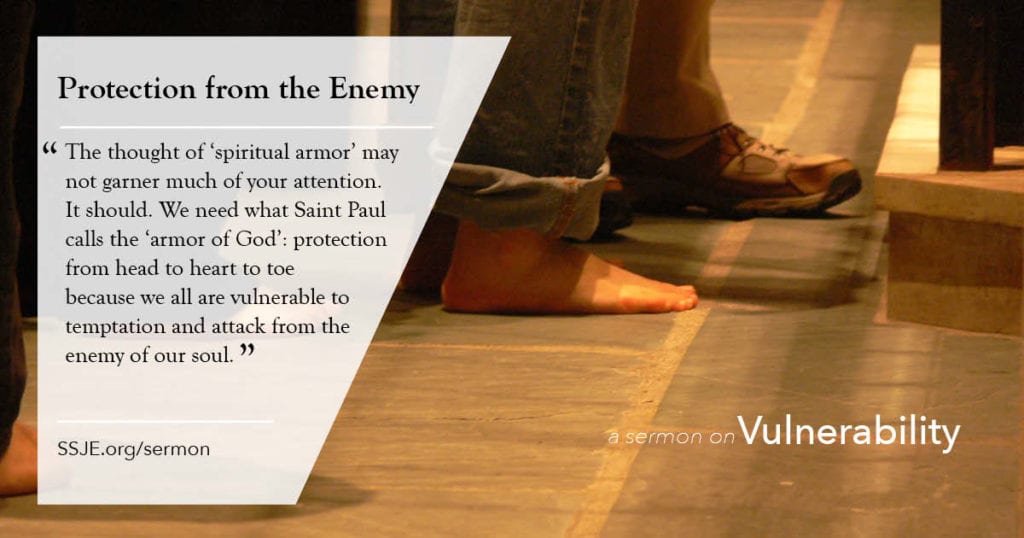 Jesus is tempted by the evil one to do something, to become somebody that was possible, but that was wrong. And he knew it was wrong, a wrong contorting of his power. Where we are most vulnerable to temptation is not just where we are weak, and know it, but rather where we are strong, and can use our power to the wrong end.

Jesus, and, later, Saint Paul, were convinced there are forces of both good and evil at work in this world. The evil forces are very seductive. Why else are we prone to do or say what we know full well to be wrong? Why do we cave in? And so Saint Paul speaks of our need for spiritual armor… which may sound a little corny in this day and age. But this is a “heads up” about our need for just that: spiritual armor, of needed protection for our soul.[i]

You probably do have up-to-date anti-virus software on your computer. You probably do take your doctor’s recommendation for immunizations against polio, tetanus, hepatitis, pneumonia, and influenza. You probably do wash your hands throughout the day as a kind of precaution against invasive germs and viruses. You probably accept our country’s need for military defense to guard us against an enemy attack. All of these are protections to ward against adversarial powers. But the thought of “spiritual armor” may not garner much of your attention. It should. We need what Saint Paul calls the “armor of God”: protection from head to heart to toe because we all are vulnerable to temptation and attack from the enemy of our soul.[ii]

I’ll draw on the insight of Saint Ignatius of Loyola, the sixteenth century founder of the Society of Jesus, the Jesuits. In his earlier life, Ignatius was an armor-bearing knight and soldier.[iii]  Ignatius says that the enemy of our soul is like a calculating general sizing up the opponent.

In our lifetimes, we do not lose our spiritual vulnerability. We would not want to lose it.  How we come to know God, how God breaks through to us, is oftentimes through something that is broken in our lives. That break becomes God’s breakthrough, again and again. But our being vulnerable for the good also puts us at risk for being vulnerable to the bad. I’ll use a medical analogy. A patient in a hospital anticipating surgery is looking for a good outcome. The surgeon will take every precaution that something bad, something potentially infectious or invasive, does not infiltrate what is opened up for the good. And so must you. We are spiritually vulnerable, for good and ill. Ignatius of Loyola says that there is a kind of spiritual warfare going on around us and within us.  We are being fought over, and we need to be protected.

Ignatius says that in every soldier’s set of armor there are chinks, little breaks in the armor’s lattice that make the soldier particularly vulnerable in those areas. Ignatius says these particular breaks don’t go away in life. Where and how you are vulnerable will likely remain for the rest of your life. Ignatius simply says, remember, you’re vulnerable. Don’t let down your guard, especially where you know yourself to be vulnerable.

We need spiritual armor. We personally need the 21st century equivalent of the 1st century “armor of God” described in the Letter to the Ephesians so that we can stand firm.[iv] Saint Paul gives a spiritual overlay to the first-century armor of a Roman soldier: a belt of truth buckled around your waist; a breastplate of righteousness to give you courage and protection to face what is wrong and must be righted; your feet fitted so you are ready to spring not to war but to peace; a shield to extinguish the flaming arrows, the strategic attacks of the evil one; a helmet of salvation to guard your mind from what is untrue or fake. That’s first century Roman armor, allegorized.

There is more going on in this world than meets the eye: the spiritual equivalent to germ warfare. The presence and power of God is operating: God’s light and life and love. God’s invitation for us is to co-operate with how God operates: to claim our need for protection and God’s invincible and available power. And God’s power and protection we’re assured of. Claim it. Claim what you need. Saint Paul writes, “we are more than conquerors through him who loved us.  For I am convinced that neither death, nor life, nor angels, nor rulers, nor things present, nor things to come, nor powers, nor height, nor depth, nor anything else in all creation, will be able to separate us from the love of God in Christ Jesus our Lord.”[v]  Heads up. Claim the protection you need, the armor God has for you. Take it up… and having done, do not be afraid.[vi]

[i] In Ephesians 6:12-13, Saint Paul writes that “our struggle [in this world] is not against enemies of blood and flesh, but against the rulers, against the authorities, against the cosmic powers of this present darkness, against the spiritual forces of evil in the heavenly places…”

Posted in Sermon, The Human Condition and tagged Matthew 4:1-11
1 Comment

As the daylight changes, as the blankets and mounds of snow melt, and the ground and gardens come back into view, how the perspective changes. We stay out longer as light extends. We see what was hidden: familiar plants along with trash and debris. Today’s scripture stories tell two perspectives: one in a garden, one in a wilderness.

That first garden was Paradise with everything provided. Amazing life with an abundance of food, pleasure, beauty, creatures and companionship. Our first parents had a life of harmony with nature, with each other and with God. They were naked and unashamed.  END_OF_DOCUMENT_TOKEN_TO_BE_REPLACED

For centuries, the Church has reflected on the human condition and on temptation as a universal human experience.  This fact probably has much to do with our observance of Lent that began last Wednesday.  Lent is a forty-day period of self-examination, reflection, and repentance that calls to mind Jesus’ own struggle with temptation.

If you were to look at a calendar you might notice that there are actually forty-six days between Ash Wednesday and Easter Sunday.  But, according to the Church’s age-old system of reckoning, Sundays, as feast days commemorating our Lord’s resurrection, are not Lenten days.

Forty days, out of a year, is a relatively short period of time.  The longer I live, the shorter it seems.  But when it comes to Lent it can’t seem short enough.  Today is the first Sunday in Lent and I’m ready for Lent to be over.  I don’t like Lent much.  So this morning, I am consoling myself with the thought that there are only thirty-six more days of Lent. END_OF_DOCUMENT_TOKEN_TO_BE_REPLACED

Some of you may have noticed as you entered the chapel this morning the icon displayed on the small table in the antechapel. The name of the icon is “Ladder to Heaven,” and it dates from the 12th or 13th century. The original icon can be found at St. Catherine’s Monastery in the Sinai desert. END_OF_DOCUMENT_TOKEN_TO_BE_REPLACED