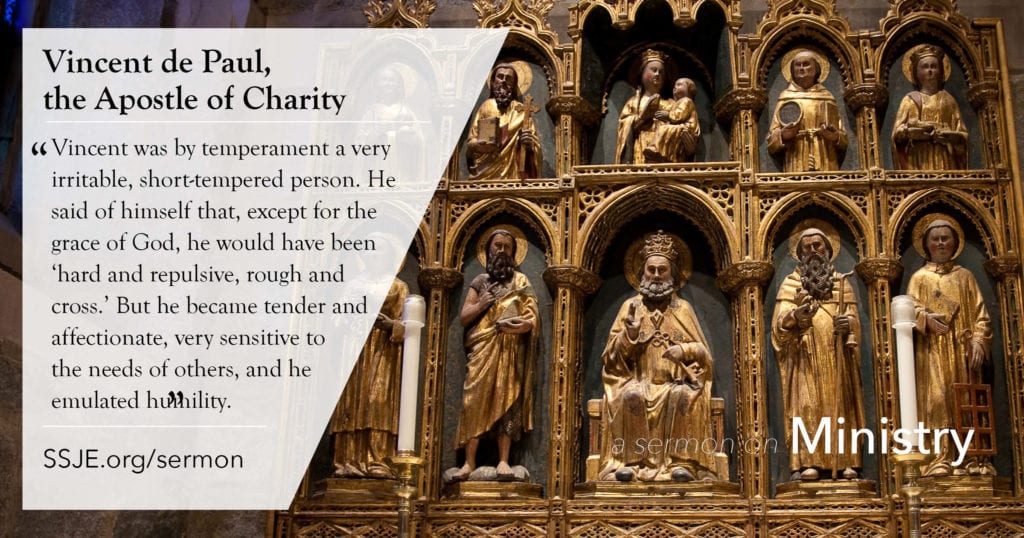 In the calendar of the church we remember the life and witness of Vincent de Paul.  He was born in France in the year 1580 to a peasant family. He was bright, given educational opportunity, and, at 20 years old, was ordained in year 1600. This was a time of enormous change in western Europe. Most historians locate the late 15th/early 16th century as the beginning or at least maturing of western capitalism. Merchants, entrepreneurs, and bankers accumulated and manipulated capital in unprecedented levels. It was the best of times and the worst of times, worst certainly for the bankrupt and for the poor, who became more numerous and more destitute. History repeats itself.

Vincent, when called to hear the confession of a dying man, was shocked by the spiritual poverty of the penitent. Vincent began preaching sermons on confession, calling people to the necessity of repentance. His sermons were so persuasive that villagers stood in line to go to confession. It was not just the laity, but also his fellow clergy whom he found so poorly formed in their own ministry. He became a pioneer in the renewal of theological education, and was instrumental in establishing seminaries. He also pioneered conducting retreats for clergy. In year 1626, Vincent and three other priests vowed to live and pray together, and to devote themselves as mission priests. The founder of the Society of St. John the Evangelist, Richard Meux Benson in the 1860s, patterned our own community on Vincent de Paul’s Company of Mission Priests.

When I was a small boy my father usually read to me from a story book at bed time, before I said my night time prayers and went to sleep. When my grandmother was visiting, usually once or twice a year, she would tell me a Bible story. One of the earliest of those that I remember was the story of the boy Samuel in the Temple that we heard as today’s first reading.

I was too young to understand why Samuel was sleeping in the Temple, but I understood enough to know that he was there learning to serve God. END_OF_DOCUMENT_TOKEN_TO_BE_REPLACED

On Ember Friday, we are asked to pray for the choice of fit persons for the ministry.  We can find this theme reflected in the readings for today.

The reading from 1st Samuel is about a significant incident early in the life of the boy Samuel. END_OF_DOCUMENT_TOKEN_TO_BE_REPLACED