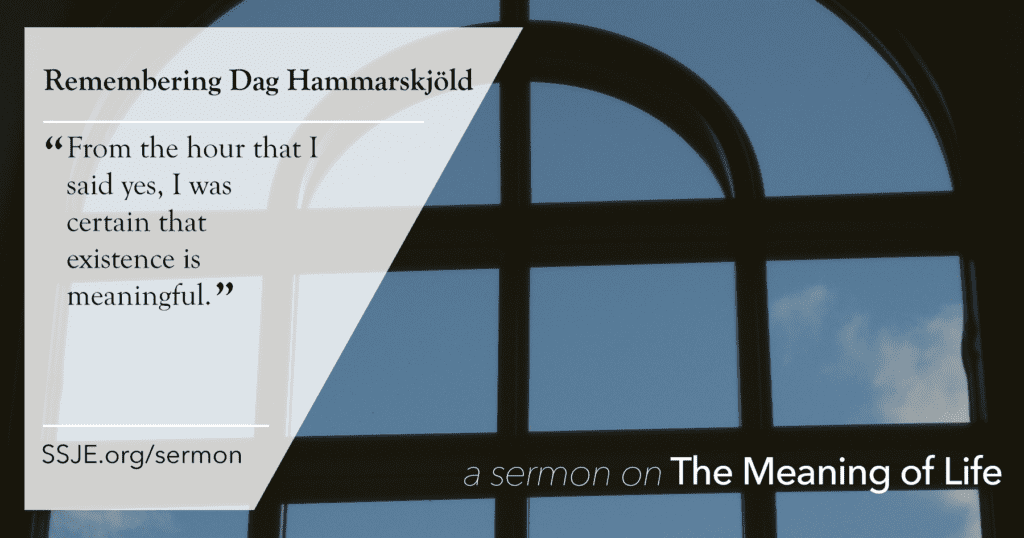 On this day, in 1961, there was a plane crash in Central Africa and it took the life of Dag Hammarskjöld, who was the Secretary-General of the United Nations. He was an extraordinary man, and in the calendar of the Church we keep him on this day. He is kept as a memorial in the Church firstly because he was a man tirelessly committed to the cause of peace, who was willing to undertake the greatest personal sacrifice on its behalf. In fact, the plane which crashed in Africa was taking him on a very dangerous mission and most of the people in the UN didn’t want him to go, but he was very brave. He was going to negotiate a ceasefire between warring factions in the Congo.

The second reason Dag is remembered and honored in the calendar of the Church is because of what was found in his apartment in New York shortly after his death. It was a manuscript and it was full of journal entries. He wrote in it every day, and there were poems, and they (i.e. the journal entries) covered a period of several decades and revealed a rich, hidden life. No one knew it existed – and no one knew that this was what was going on deep within this man, within his inner life. They revealed a man of deep faith, whose courageous life of self-sacrifice was a direct result of what went on in those times of silence, often very early in the morning – times of passionate (prayer), sometimes wrestling (with God), sometimes commitment to God. END_OF_DOCUMENT_TOKEN_TO_BE_REPLACED

Posted in Call, Sermon and tagged Meaning of Life, Service
Leave a comment
Scroll To Top