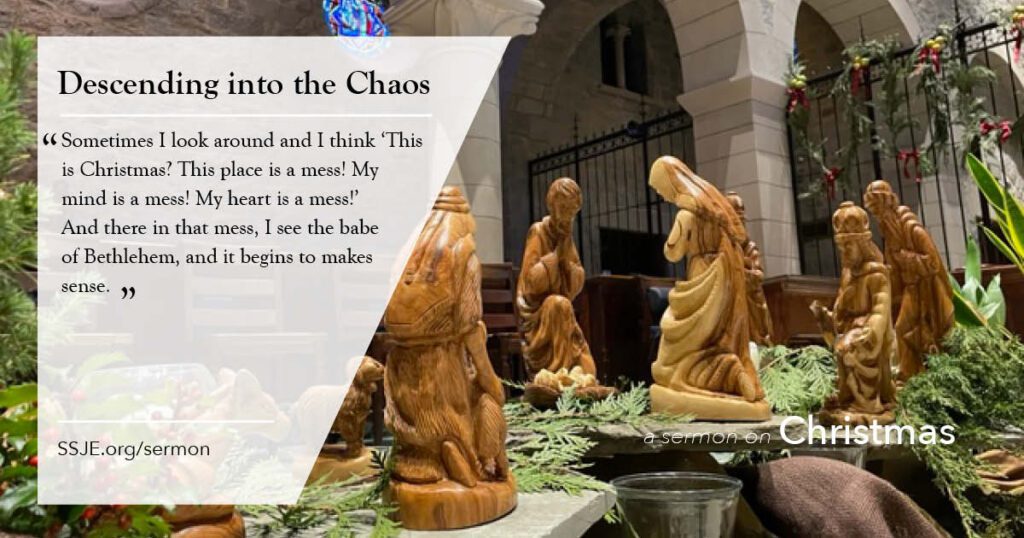 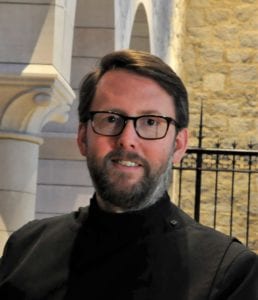 It’s always a wonder to me the way Christmas unfolds each year.  There is often a moment that seems to freeze in my mind and I think this is Christmas.  And my mind is full of those scrapbook pages of moments, the ghosts of Christmas past.  There are lots of them that have that picture-perfect quality.  The laughter drenched party with friends.  The silent, holy night of Christmas Eve worship.  The quiet Christmas morning in the Colorado snow.  But, the moments that seem to be surfacing most these days are the ones that are much less tidy.  I might describe them as the descent into chaos.  It’s when the shine has worn off, when has headache set in, when packages lie eviscerated in a pile of torn gift wrap on the floor.  Sometimes I look around and I think “This is Christmas?  This place is a mess!  My mind is a mess!  My heart is a mess!”

And there in that mess, I see the babe of Bethlehem, and it begins to makes sense.

In the beginning when God created the heavens and the earth, the earth was a formless void and darkness covered the face of the deep, while a wind from God swept over the face of the waters.  (Gen. 1:1) 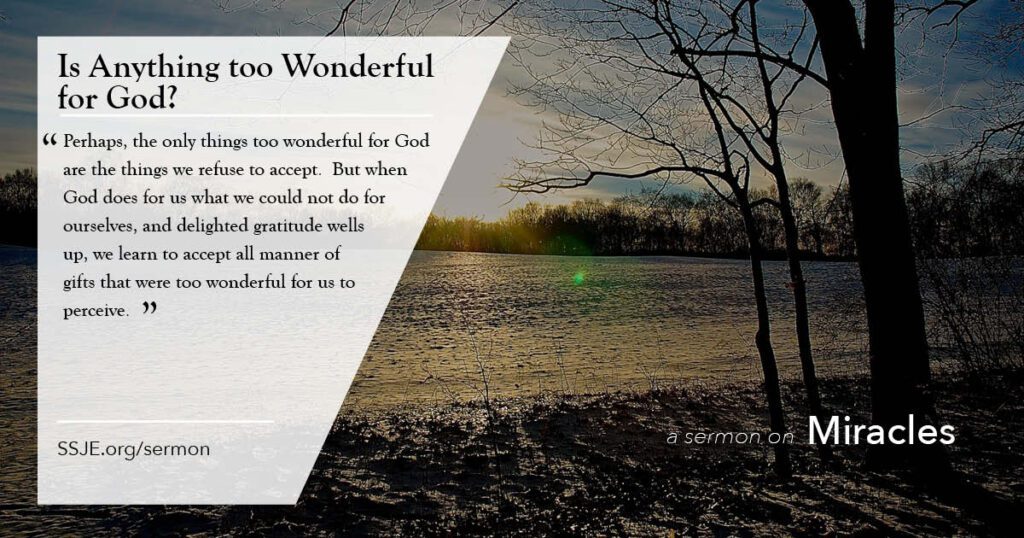 It’s hard for me to give an unqualified response.  Is anything too wonderful for God?  No, but…

There are ways that I am inclined to protect my hopes and expectations from disappointment.  Ways that I may choose to limit God’s ability so that God conform to the pattern I have ostensibly observed.  Perhaps I’m like Sarah in that regard.  Laughing in the face of an irrational proposition.  After a long life had taken its natural course, Sarah was aware of the typical pattern of women ceasing to bear children after a certain point.  She had not been able to conceive while she was in child-bearing years, let alone now that the time had passed.  We might excuse her laughter but her mysterious interlocutor didn’t.  With a childlike simplicity he challenges her settled assumptions.  Is anything too wonderful for God?

The centurion in our gospel passage today also had a life of experience that had inclined him in a particular direction toward the wonderful acts of God.  But his posture of faith and trust was such that it amazed even Jesus.  After so frequently being doubted, challenged and question for a sign, for proof of his power and authority, Jesus seems to be refreshingly shocked that some pagan Roman occupier was willing to approach with open expectations and trust.  “You mean, you’re willing to just believe?”  And more than that, the Centurion doesn’t even want to micro-manage Jesus into doing it his way, dragging him to his servant’s bedside, making sure that Jesus uses the right gestures, the perfect phrases, maybe a dramatic shout to ensure that the servant is healed.  Rather, he simply trusts that Jesus has the authority to accomplish his request.    END_OF_DOCUMENT_TOKEN_TO_BE_REPLACED 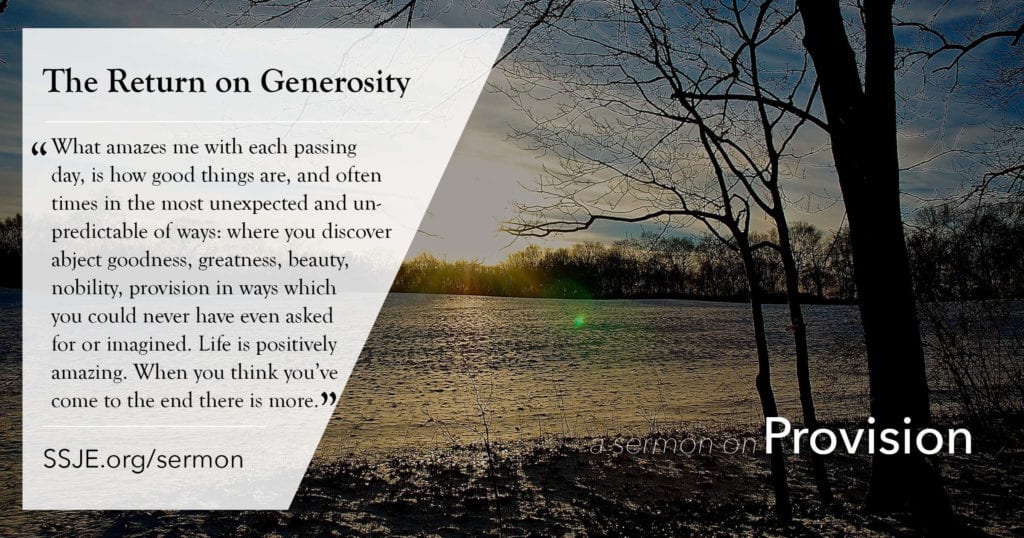 In our Old Testament lesson we read of Elijah’s encounter with the widow at Zare­phath.  She lives in the face of imminent starvation. She pours out her heart to the prophet Elijah. She has only a handful of meal and little more than a drop of oil which will form the last supper for her and her son. And you know what happens. She shares her paltry rations with Elijah, and the meal jar and oil never thereafter give out. It’s a beautiful story. I’m not sure, though, that it literally happened. I mean, if we could somehow bring a CNN camera crew back some thousands of years to this particular incident, I have doubts whether this exact story, as it’s been told to us in the scriptures, could be captured on film. This particular encounter between Elijah and the widow at Zarephath, as it’s recorded in the First Book of the Kings, is too isolated, too exceptional a story to “make history,” to be remembered down through the centuries… and to show up in the Canon of Holy Scripture and in our Sunday lectionary every three years or so.

The reason the story about the widow’s oil has been passed down, generation to generation, is not because it literally happened. Maybe so; maybe not. The story has been remembered because it’s true. I suspect most every one of us here has our own version of this story: that when you don’t have what is required, you are given what you need.

What might be your version of this story?  I think you have one. When you’ve come to your end. When the cupboard of your imagination is empty and you cannot, for the life of you, figure out how you can make it, how you will make it, given where things are with you finan­cially, or emotionally, or spiritually, or physically; given where things are for you in relationship to your spouse, or part­ner, or employer, or children, or neighbor, or relative. When it all seems a dead end preceding a kind of death. Death, literally, or simply the death of hope, the death of a dream, the death of a possi­bility or of a chance. I don’t know how your story has come out… but it surely has come out, and in some amazing ways, because you’re here. You’ve made it to today… which is probably nothing short of a miracle. (It probably is a miracle.) The reason this story about the widow’s little jug of oil has been saved and shared down through the centuries is because it’s our story. It’s a true story, and on two levels.

On the one level there is the reminder about the miracle of provision. When what is absolutely essential for you to live, when what is crucial for your surviving the day (literally or metaphorically), provision somehow happens. It’s maybe in the form of finances or food. Sometimes it’s no more than almost crumbs of attention and care. This past week, one day I was having a particularly tough day. I found myself on kind of a roll… downhill. I mean, I was not about to literally die… but the day was really killing me. It may sound a little melodramatic, but there was a line from Psalm 116 floating through my brain at the time:

“The cords of death entangled me;
the grip of the grave took hold of me;
I came to grief and sorrow….”

And then late in the afternoon I passed one of my Brothers in a hallway here in the monastery.  He spoke to me, just as we were passing one another. He said a few words to me that were exceedingly kind, and he smiled at me. And we parted … And I was a new man. Absolutely transformed. In the instant.  From that moment the whole day – what had already transpired and what was to come – the whole day looked different. I could now see the day’s being the most amazing series of events, for which I was almost immediately given the grace to be thankful. That’s a word for it: grace. When you abso­lutely haven’t got what it takes, and you’re given what you need.

If your life is anything like mine, I suspect you have had a lifetime of experiences – big and small, so many they are without number – where provision and goodness, God’s provision and goodness, have come out of both the surest and the sorriest of situations. That sorrowful Psalm 146 about “grief and sorrow” that was on my mind the other day takes a turn for the better. The psalm continues:

“…Then I called upon the Name of the Lord:
‘O Lord, I pray you, save my life.’
Gracious is the Lord and righteous;
our God is full of compassion.”

Recently I was listen­ing to someone who was talking about how bad things are in so many places around the world, and in our own country, and their own town, and – some days, because of it all – in their own heart. Bad stuff. This person asked for my “take” on things. I could not find any argument with what they were saying. But I had to add that what amazes me even more, with each passing day, is how good things are, and often times in the most unexpected and un­predictable of ways: where you discover abject goodness, greatness, beauty, nobility, pro­vision in ways which you could never have even asked for or imagined. Like being surprised by joy. The widow at Zarephath would not have known the word, “grace,” but we do. We as Christians do, and grace is amazing. That’s one thing about this story of the widow’s bottomless vial of oil that is worth sav­ing and savoring: life is positively amazing. When you think you’ve come to the end there is more.

Another reason why this story about the widow at Zarephath is true is because it’s a kaon about generosity. There is a risky principle about life which may seem counter-intuitive until you’ve tested it: what you give away seems to be in direct proportion to what you receive. And I don’t even mean one-for-one. It’s much more than that; it’s like a hundred-fold. There’s a de facto principle in life that in giving you receive. As if to say the one makes the space for the other. St. Catherine’s Episcopal School in Richmond, Virginia, has as its motto: “What we keep we lose; only what we give remains our own.” Marvelous! There is something about participating in life as a gift, not clinging to it, not hoarding it, but cherishing it, participating in it, then sharing it with a kind of reckless abandon that is the real deal, because that’s like God. It’s for us to be generous with the things in life to which we’ve been entrusted. But it’s deeper than just about things. It’s to be exceedingly generous with our kind­ness, attentiveness, gratitude, gentleness, and interest for others.

The scriptures appointed for today herald widows. There is this wonderful story about the widow at Zarephath in the First Book of the Kings. There’s also a tender remembrance of widows in Psalm 146, appointed for today: “the Lord sustains the orphan and widow.” And then today’s Gospel lesson recalls the poor widow who shares two pennies, “the widow’s mite.” This, too, is a story that is bigger than life and, it’s also a true story. Jesus’ point is not that this poor widow, in giving her two pennies, gave a better gift than the rich person who gives large sums. They both are benefactors, and both are giving from their personal treasury. What’s distinctive about the widow’s mite is simply in her will­ing­ness to give her gift, her little gift.

Life is not so much big events; life is a lot of little events which can become profoundly significant. The story of the widow’s mite is quite similar to the story of the widow’s vial of oil in terms of a generous availability in even the smallest of ways. From these widows’ stories, we are reminded about the greatness in small things, which we also see lived out in Jesus Christ who, as we read, “… emptied and humbled himself….”[ii] I recall Mother Teresa’s saying, “We cannot do great things on this earth. We can only do little things with great love.”

There’s a moral in these wonderful and true stories about the widow’s oil and the other widow’s mite: