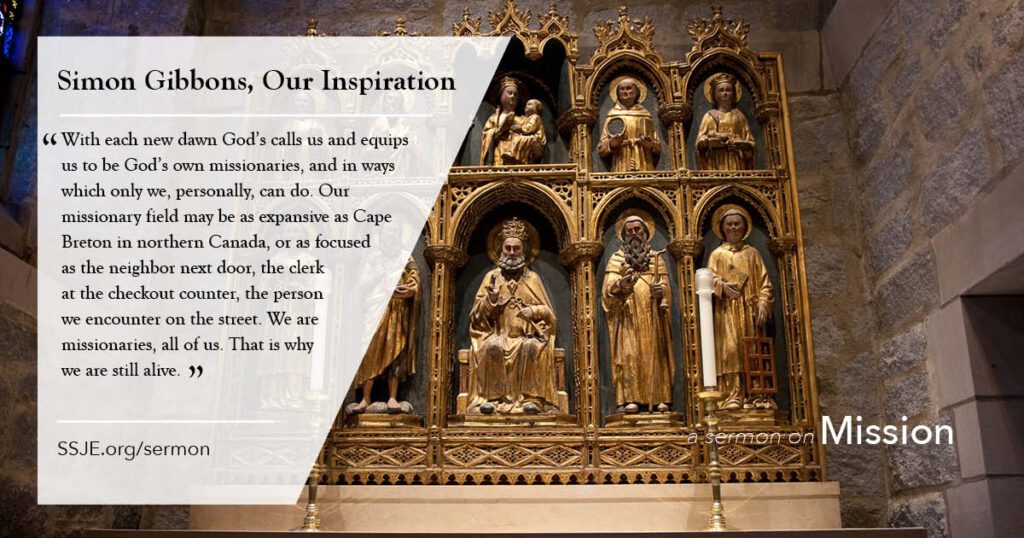 In the calendar of the church, we remember today a Canadian missionary priest of the Anglican Diocese of Nova Scotia, Simon Gibbons, who died on this day in 1896. Simon Gibbons was an Inuit, a member of the indigenous people, a majority of whom inhabit the northern regions of Canada. He was the first Inuit to be ordained to the priesthood.

Simon Gibbons was born in Labrador, and both his father and mother died before he was six years old. He was raised in an Anglican orphanage, showed early signs of being very gifted intellectually, and eventually went on to King’s College in Nova Scotia. He was ordained to the priesthood in 1878. He began his ordained ministry on foot as a missionary in the northeastern tip of Nova Scotia on Cape Breton Island. On Cape Breton, the “nor’easters” and the snows begin in November, and by April the typical snow accumulation is 10-12 feet. Winter temperatures typically drop to 5° or colder. Simon Gibbons regularly walked in snowshoes a one hundred-mile circuit on the island to the many small communities to comfort the sick, to teach the hope of Christ, and to administer the Sacraments of the Church.

As a pastor, Simon Gibbons was described as “very joyful.” He was also very industrious. He eventually moved onto the Nova Scotia mainland, where he was appointed the rector of a parish on the northeastern coast. He pastored a multitude of people, and supervised various building projects for the church. He was greatly beloved. He was also greatly spent in his physical stamina. His health had been compromised in the strain from his arduous earlier ministry as a missionary on foot. He died at the age of forty-six.

The Gospel lesson appointed for today mirrors the life and ministry of Simon Gibbons. Jesus was saying, ‘The harvest is plentiful, but the laborers are few; therefore ask the Lord of the harvest to send out laborers into his harvest.” Simon Gibbons heard this message, and he went out as what Saint Paul called “an ambassador of Christ.”[i] I find it impossible to imagine taking on a missionary ministry in any way similar to Simon Gibbons. The mere thought of it sends shivers into my spine. Simon Gibbons is an amazing example of why the church commemorates the holy ones from times past. The reason we remember such souls is not that we are to replicate their life and ministry. Rather, it is for us to draw inspiration from their lives to encourage us in our own life and ministry.

When we awaken in the morning, we can be reassured both of God’s presence and God’s provision – that we will be companioned by God and equipped by God. We can also be assured, with the dawning of each new day, that God has given us a mission, which is why we are still alive. Ignatius of Loyola – the 16th century founder of the Jesuits – said that the purpose for which we have been given life – and why our life has been sustained into today – is “to know God, and to love God, and to serve God.”[ii] We are all missionaries. By our own cultural heritage, by our own geographic setting, by our training, education, life experience, and unique access to certain people, we are to bear the beams of God’s light, and life, and love, knowing that God is with us and that God will provide.

Some years ago my younger brother, Kyle, was visiting us here in the monastery. I adored him. He was a career Air Force officer for more than 20 years, he was lay minister, he was married, and he was the wonderful father of eight children. Eight children! I remember saying to him on this visit, “I don’t know how you do it. How do you juggle your life and all your responsibilities with such amazing grace?” He looked at me rather incredulously and said, without a pause, “This is what I was made to do. This is the glove that fits.” And then he said to me, “What I don’t understand is how you do what you do as a monk. That to me is impossible.” We both chuckled because we both had found our respective vocations, our very unique callings, and we were thriving.

With each new dawn God’s calls us and equips us to be God’s own missionaries, and in ways which only we, personally, can do. Our missionary field may be as expansive as Cape Breton in northern Canada, or as focused as the neighbor next door, the clerk at the checkout counter, the person we encounter on the street. We are missionaries, all of us. That is why we are still alive.

[ii] These are Ignatius’ opening words from his “Foundation and First Principle” of his Spiritual Exercises.

Today we remember Edmund James Peck, a missionary to the Inuit in Canada for 40 years in the northern Arctic.  His mission service began in the later part of the 19th Century and continued until he retired to Toronto in 1921.  He died in 1924.

We are told that early in his ministry to the Inuit people he got the feeling that they did not really understand what he was trying to do.  One day he overheard a group of the Inuit talking about him.  “Oh, him, he came down from heaven to save the Inuit.”  He knew that he had not come down from heaven. But from that time on he tried his best to make the last part of what he had heard come true.  He had come to bring the message of Jesus’ saving love to the Inuit people. He tried to make it true.  I think he did.  END_OF_DOCUMENT_TOKEN_TO_BE_REPLACED