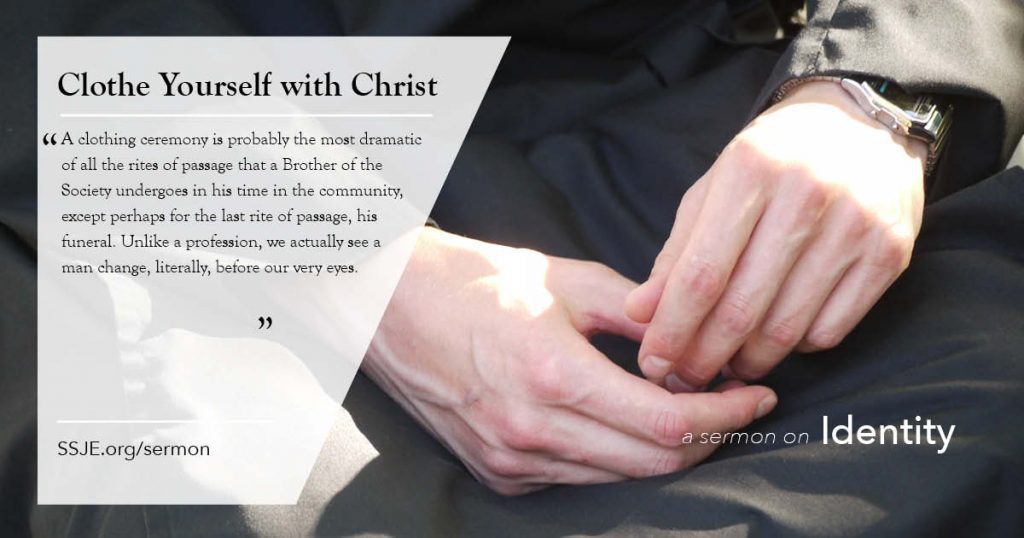 It is perhaps no accident that I have been thinking a lot about clothing in the last few days. Yesterday at Evening Prayer we had the wonderful occasion to clothe our brother Lain in the habit of the Society. Some of you were here for that, and others perhaps joined us remotely.

As I have said before, a clothing ceremony is probably the most dramatic of all the rites of passage that a Brother of the Society undergoes in his time in the community, except perhaps for the last rite of passage, his funeral. Unlike a profession, we actually see a man change, literally, before our very eyes.

Having put on, and taken off my own habit, thousands of times, over the last 30 years, it is this putting on of the habit for the first time, that I find so moving. It is especially moving watching him as he fumbles and searches the fabric for various hidden buttons, and snaps, and tries to wind and knot the cord with as much dignity as possible. Getting dressed, in a strange outfit, in public, with everyone watching, is actually much more difficult than you might think! In that moment, it is just an awkward and cumbersome suit of clothes. But the habit is much more than a suit of clothes. As we say in our Rule, [the habit] is dense with meaning, [and] a source of joy.[1]

As many of you saw, at one point in the service another Brother gives the habit to the postulant saying let the habit remind you of the baptismal gift of your union with Christ. You have put him on; he clothes you with his own self.[2] END_OF_DOCUMENT_TOKEN_TO_BE_REPLACED