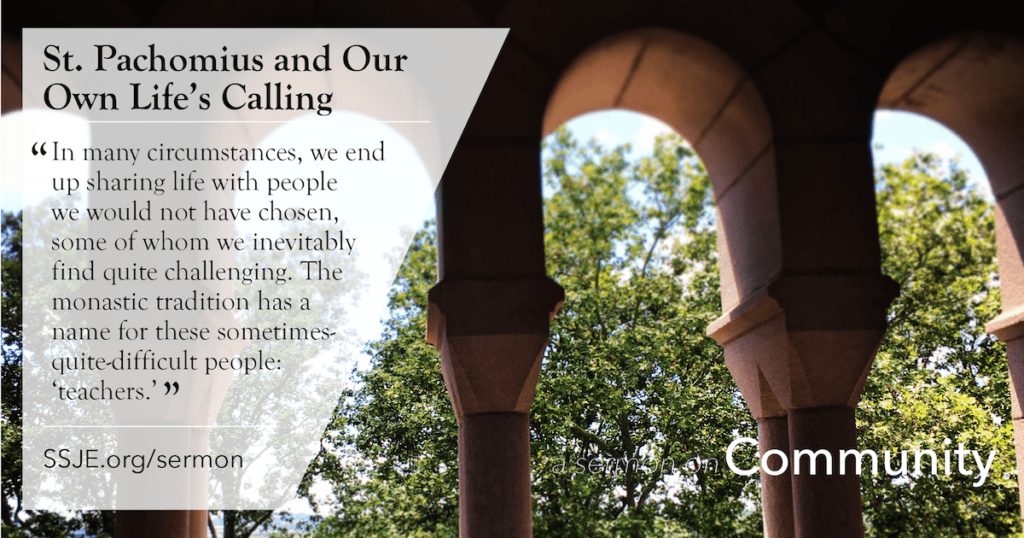 In the calendar of the church we remember today an Egyptian monk named Pachomius, who lived years 290-346. Pachomius was born in a small village in northern Egypt to a family who worshipped the gods of the Pharaohs. As a young man Pachomius was conscripted into military service. His fifth-century biography, the Vita Prima, recalls that where he was billeted, he for the first time met Christ­­ians who did “all manner of good… treating [everyone] with love for the sake of the God of heaven.” Pachomius was smitten by the kind and generous camaraderie, the koinonia, of Christian believers, the very thing described in the Acts of the Apostles: “They were of one heart and one soul,” and who essentially practiced three things: these Christians lived together in community, they prayed and worshipped, and they served others. This experience for Pachomius was life-changing. He prayed to this Christian God, promising that he would live his life in the same way. When he was discharged from military service, he was baptized, and for several years was formed in the Christian life by one of the desert hermits.

Pachomius had a series of visions, something he had never experienced before. The visions were about his becoming a monk, but not alone. Christian hermits had already been living in solitude in the Egyptian desert for about 50 years, since the late 3rdcentury. But Pachomius’ visions were about his living as a monk in community. He had as a model the words which we just heard from the Acts of the Apostles: “All who believed were together and had all things in common. They devoted themselves to the apostles’ teaching and fellowship, to the breaking of bread and the prayers.”[i]And “day by day the Lord added to their number those who were being saved.” END_OF_DOCUMENT_TOKEN_TO_BE_REPLACED