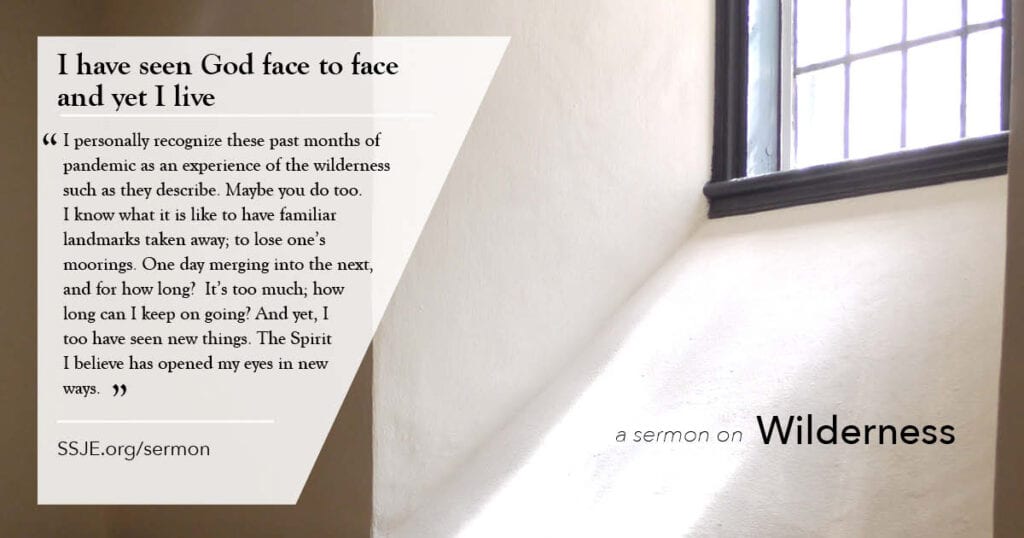 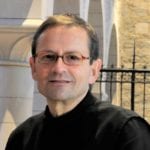 ‘I have seen God face to face, and yet I live.’ But only just! Jacob had wrestled with the angel all night, and managed to come out alive – but with his hip put out of joint.  Yet God blessed him through the struggle, and let him see God face to face.

Throughout Scripture, when the Spirit of the Lord comes down upon a person, there is so often a struggle; the Spirit is experienced as something traumatic and shattering. Dealing with God is not for the faint hearted!  Listen to the prophet Ezekiel: ‘A spirit entered me and lifted me up and bore me away. Before the glory of the Lord I fell on my face, but the spirit lifted me up’.  Daniel, standing on the banks of the river Tigris see a vision of a man, shining in glory, sent from God. The man spoke, and David fell into a trance, and then fell to the ground. Shaking with fear, he lost his strength and could hardly breathe.  The prophet Jeremiah tries to get away from the Lord’s presence, but the Spirit overwhelms him, and he cries out, ‘If I say I will not mention him or speak in his name, then within me there is something like a burning fire shut up in my bones.’  Well might the writer of the letter to the Hebrews say, ‘It is a fearful thing to fall into the hands of the living God’!

Yet, through each one of these powerful and life changing experiences, God was at work, forming and molding these very different characters to become men of God; able to speak for God, but most crucially, to see for God. Through their profound and life changing encounters with the living God, they would now see as God sees.  They would become God’s seers, and they would proclaim what they saw. END_OF_DOCUMENT_TOKEN_TO_BE_REPLACED 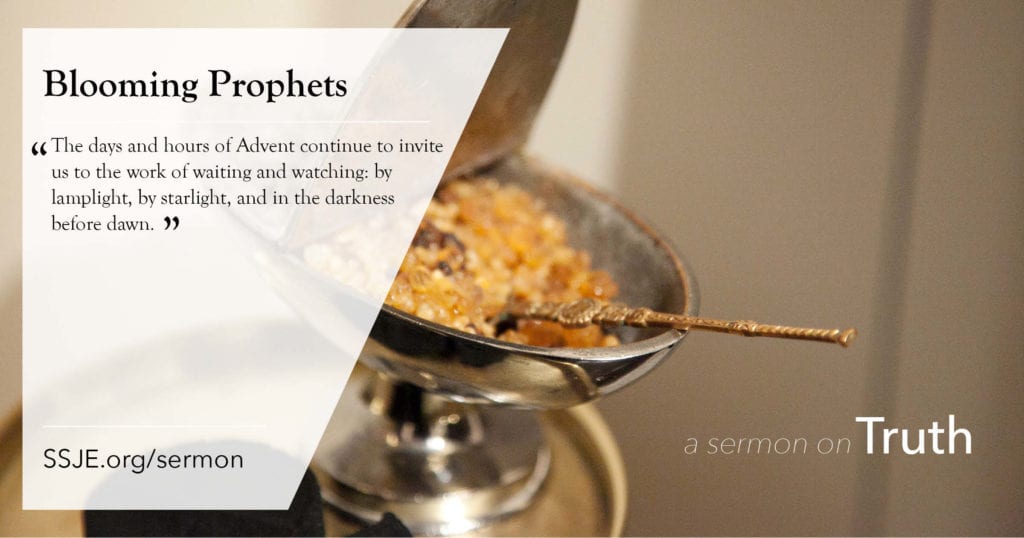 I had just loaded my suitcase into the car and was headed toward the back gate of the monastery. I was departing for a week of personal retreat and my mind was already settling into a cabin in the silent, sunlit forest at Emery House. One of my brothers suddenly thrust a small vase into my hands, with three flowers: a bright pink peony, a red rose, and a white lily. He beamed, winked, and then vanished: a guerilla ambush of kindness.

As I set the vase down on the desk in the cabin, and as I gazed at it in the days to come, it became something of a parable. The peony, by nature already large and attention-grabbing, unfolded and unfolded until she was only light and air, all her petals cast with abandon onto the floor by day two. The rose, generous but with a measured gravitas, let her petals drop more slowly. By day four, rose had departed. But the lily was a sharp, closed cone of white: fuller and rounder with every hour but cloistered within herself. I became quite certain that I would see the exact moment she blossomed. I took a long walk on the morning of day six, and of course I returned to the cabin to find her moment had arrived… under the watchful eye of God alone. Yet the fragrance filled the room, as if to thank me nonetheless for my faithful waiting and vigilant watching.

END_OF_DOCUMENT_TOKEN_TO_BE_REPLACED 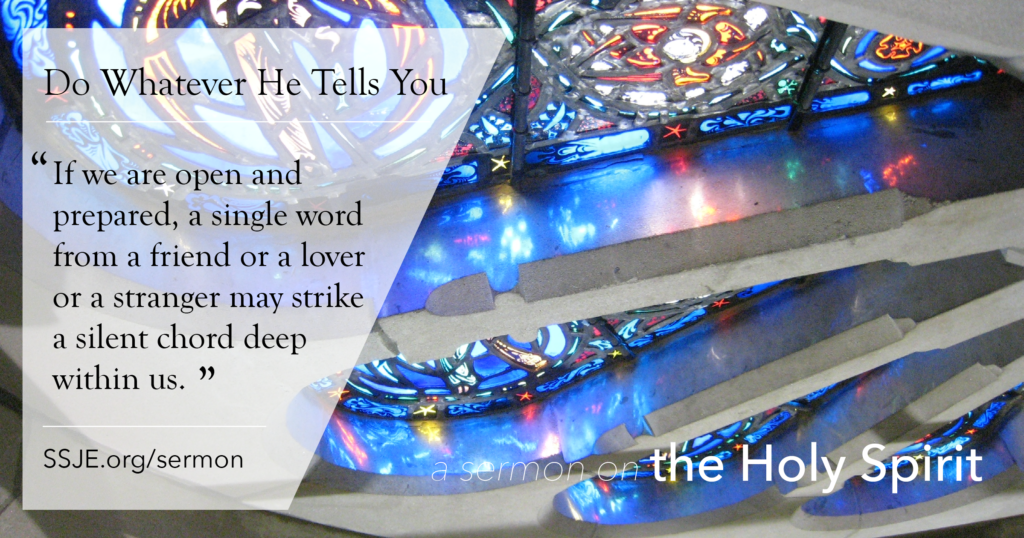 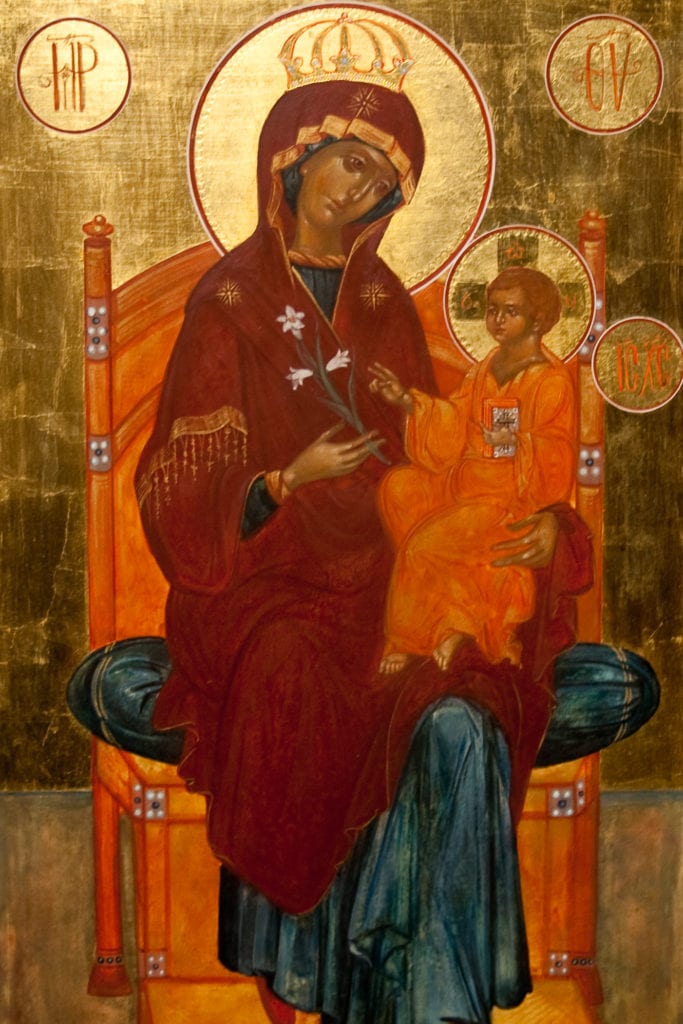 We continue our Epiphany preaching series, “Gifts for the Journey,” on following God’s call, focusing tonight on the gift of guides. Currently on display in the middle of our chapel is an icon of the Blessed Virgin Mary holding the infant Jesus. Her hand gestures toward the child, in the classic iconographic depiction of the Hodegetria, Greek for, “She who shows the Way.” The tradition of iconography identifies St. Luke the Evangelist as the first iconographer, who painted the image of Mary while she was still alive; the icon he is said to have painted is the original Hodegetria, establishing this particular image of Mother and Child as both widely popular and a deeply reflective picture of who Jesus is, and, consequently, who Mary is. Jesus is the Way, and Mary is she who shows the way, her simple and silent hand gesture representing the life of the Virgin burning, brightly and endlessly, with the love and knowledge of God. In today’s Gospel reading, this is further encapsulated. At the wedding at Cana, Mary tells the servants to do whatever her Son tells them. Just a few verses beforehand, Jesus has told the disciple Nathanael that greater signs of Jesus’s work and identity await. John, in his gospel, then describes the scene at Cana, and so gives us the first of these promised greater signs. In this scene, it is Mary who initiates the interaction, and it is Mary who points the way: “Do whatever he tells you.” Mary is ever-vigilant, always pointing to her Son, always guiding us to the Way.

And though Mary is the fullest expression of this divine gift of guidance, it was taking place long before. Soon, we will sing the Nicene Creed. About the Holy Spirit, the Creed says that “He has spoken through the Prophets.” The long line of prophetic witness is another manifestation of the Spirit’s guidance, inspiring others to be co-laborers with him in his guidance. Tonight’s first reading is from the book of Jeremiah. Jeremiah is my favorite Old Testament prophet. He is perhaps a mirror image of Jonah, whose single call to repentance of the people of Nineveh brought about repentance. Jeremiah has no such luck. He spends a lifetime prophesying to Israel of their sins and the impending destruction and exile coming from Babylon, to no avail. Jerusalem is sacked, the Temple is destroyed, and the Israelites are scattered throughout the empire. Jeremiah spends the rest of his life in exile, in Egypt; he is left with bitterness, and tears, and lamentation. But this destruction, this uprooting, is no final death. It is the clearing of the brush, the making of the paths in the wilderness. Despite their settling in the promised land of Canaan, the wilderness has not departed from the People of God. Thickets still obscure the sight of the watchers, thorn bushes still ensnare the ankles of the travelers, wandering and searching for the Way. After foretelling humanity’s long exile in the wilderness of Babylon, Jeremiah offers us a prophesy of sweet hope: that God has a plan for us, that he has not forsaken us, that he has not taken the Way from us, that he will restore his people to the place from which we were exiled. We will be shown out of the wilderness and into the Garden. The Spirit who blew over the waters at creation is still a wind, whipping over the wilderness, ever working his act of re-creation on a world and a race beset by the spiritual wilderness of the formless void. This whirlwind is the breath, the voice of the prophets in the desert, proclaiming to all who would listen: there is a way. Here is the Way.

But this prophetic speech is no ancient tongue. The Spirit has always guided the world, but at Pentecost, his descent onto the people Church is as fundamental as Christ’s Incarnation. At the Incarnation, God the Son became imbued with humanity. At Pentecost, humanity became imbued with God the Spirit. So the Spirit has not stopped moving over the waters, but now moves with more grace and more power, more gentle and more ferocious than ever before. Dwelling in us, imbuing us with gifts of divinity, the Spirit’s guidance persistently abides within us. He shows us the Way, and shows us how to imitate him in showing others the Way.

And this is, perhaps, the most likely place you may have encountered the Spirit. Often, it is very difficult to discern the Spirit’s guidance, thumping in our own chests. Instead, we look outward, toward our human fellow-travelers. In the voices of their mouths, we, often quite unexpectedly, hear the whistling of the Spirit’s divine gusts. If we are open and prepared, a single word from a friend or a lover or a stranger may strike a silent chord deep within us, might stand out as a bright and brilliant sign, pointing out the otherwise-obscured path. A conversation might take an unforeseen turn, and words that strike us as ridiculous at first glance are actually the work of the Spirit, doing his eternal labor of Creation, planting seeds in the chaotic uncertainty of our own lives, so that they might grow into trees lining the Way. Despite our best efforts to dismiss, ignore, or push aside this guidance, God assures us of the truth of his path.

And we are called to be guides, to be the co-laborers of the Holy Spirit. This is a path that requires serious discernment. But to be prophets, to emulate the Virgin Mary as She who shows the Way, is to live up to our full human vocation. We are to be guides just as we are guided. We are to travel the path of God while clearing the brush so that others may join us. The Way is narrow, and long, and often obscured, but we are assured of the Spirit’s guidance, and we are assured of our vocation to work with him in that guidance. Let us show forth our Way.

This sermon is part of the “Gifts for the Journey” series. We hope you’ll check out the other sermons in the series.

It was a dark, cold, and snowy night in March of 2009.I had missed the highly erratic number 86 Bus by 5 minutes. The walk from the Sullivan Square train station in Somerville to my apartment was about 1.5 miles, a twenty minute schlep in my snow boots. Though I didn’t relish the prospect of a poorly lit walk through a fairly unpleasant neighborhood at that hour, my feet seemed to make the decision for me. My hand groped in my coat pocket for my prayer rope, as my mind groped for the familiar repetition, Lord Jesus Christ, have mercy on me.

It was a difficult period in my life. There were many moments when the anxiety of daily existence felt overwhelming. I was only partially employed; a number of friends had recently moved away; my apartment was cold and dilapidated; I was searching for direction and purpose. Beneath the surface of it all, in my quiet moments, the anxiety of existence itself stared back at me, sharp and real. Most days, prayer preserved my sanity. But on days like this one, brow furrowed, teeth clenched, heels pounding the frosty pavement, prayer felt like firing a nail gun into an empty sky. Lord Jesus Christ, have mercy on me. Three-hundred nails, on average, from the train station to my doorstep. END_OF_DOCUMENT_TOKEN_TO_BE_REPLACED

During the month of August, while the Chapel is closed, we are reposting sermons that we hope will inspire you to embrace play, silence, solitude, and recreation.

I once had a deaf friend, an earnest Christian, who asked me whether hearing people could hear God’s voice as clearly as they could hear one another’s voices. He had often observed hear­ing people responding to one another’s voices, mysteriously communicating meaning to one an­other through the movements of their jaws and lips, and understanding one another even when they weren’t look­ing at each other, or when the speaker was in another room. He had learned that they pos­sessed a mysterious ability that he had never had, and now he wondered if the same ability that enabled them to communicate with one another even when sep­arated by a wall or a door enabled them also to com­­­municate with God. “Does God talk to you?” he asked; “Can you hear God?” END_OF_DOCUMENT_TOKEN_TO_BE_REPLACED