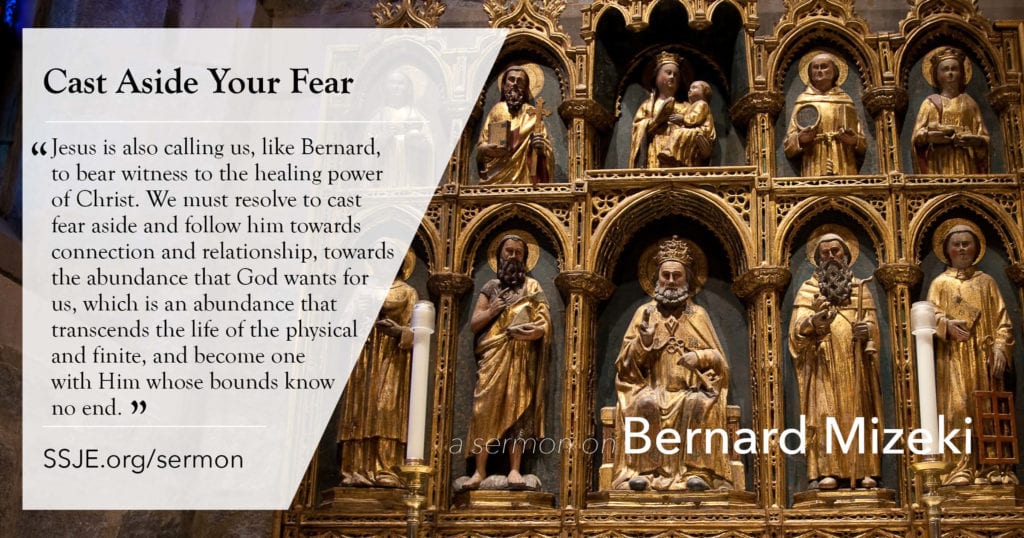 When reading the lessons appointed for today, I could not get the front page of the Boston Globe from the day after the Marathon bombings out of my mind. The large picture was of a woman lying on the sidewalk in a pool of blood with two men attending to her, one applying pressure to her badly wounded leg. The bold print accompanying the article underneath the picture read, “Amid Shock, A Rush to Help Strangers.”The article went on to describe the various reactions to the bombing.[i]The one I think we all can identify with is fear and the immediate need to get away to safety as fast as possible.  All of us have this innate instinct for self-preservation that when something devastating happens, the body is driven to action by chemical processes in the brain such as the release of adrenaline.

There was also the unthinkable reaction of some, who despite not knowing what was coming next, ran toward the explosion sites to start helping people who had been injured. Some of the first responders were trained EMT’s, doctors, and nurses….and then there were others who had no idea what to do except to apply pressure to wounds and keep talking to the injured to ward off shock.  In a chaotic scene such as that, I can only imagine the overwhelming sense of helplessness some people had, yet remained behind to help in any way possible, risking their own lives in the process.  I greatly admire these people and wonder if I would have stayed to help or if I would have followed my instinct to run away to safety.

END_OF_DOCUMENT_TOKEN_TO_BE_REPLACED

For several years prior to my coming to the monastery I was a parish priest. Along with a good many other pastors in the area, I took a monthly rotation as a night chaplain in the local community hospital. During these night shifts, we chaplains would spend most of our time on-call in the intensive care unit and in the emergency room, caring for traumatized patients, END_OF_DOCUMENT_TOKEN_TO_BE_REPLACED