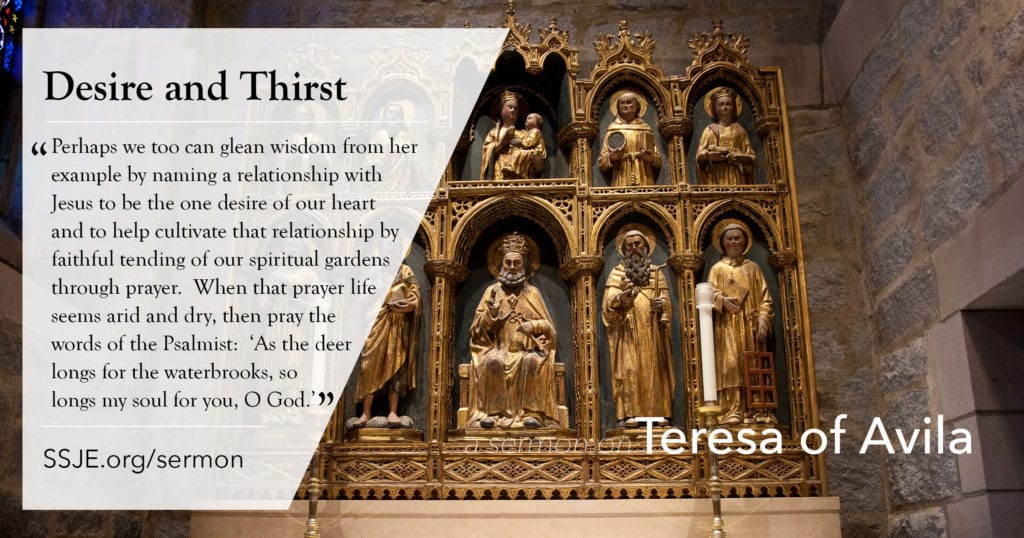 Today in the calendar of the church we remember the sixteenth-century nun, abbess, and mystic Teresa of Avila.  Born Teresa de Cepeda y Ahumada to a family of partly Jewish ancestry, she lived at a time of incredible persecution of the Jews known as the Inquisition.  Educated by Augustinian nuns, she began to feel called to the consecrated life and joined a Carmelite Order.  She eventually became distracted by the mollified Rule of the Order and set out to found a reformed Order called the Discalced Carmelites.  The word ‘discalced’ is derived from the Latin word meaning ‘without shoes.’   Throughout the course of 25 years, she traveled frequently establishing 17 convents of the reformed Order.  She wrote many letters, poems, books on the religious life, as well as an autobiography:  The Life of Teresa of Jesus.

While it would be easy to project a certain saintly color of piety on Teresa, her autobiography proves her to have been very unconventional for what we imagine a contemplative nun to be.  She is said to have been a very passionate person, describing in her autobiography mystical visions, highly erotic in nature.  She writes viscerally of one of these visions in which an angel repeatedly thrusts a golden lance into her heart: ‘I saw in his hand a long spear of gold, and at the iron’s point there seemed to be a little fire. He appeared to me to be thrusting it at times into my heart, and to pierce my very entrails; when he drew it out, he seemed to draw them out also, and to leave me all on fire with a great love of God. The pain was so great, that it made me moan; and yet so surpassing was the sweetness of this excessive pain, that I could not wish to be rid of it.’   We can hear overtones of the Song of Solomon that seem to mix the essence of eros and agape, that is erotic love and Godly love.  In her vision we experience her desire to be one with God.[i]