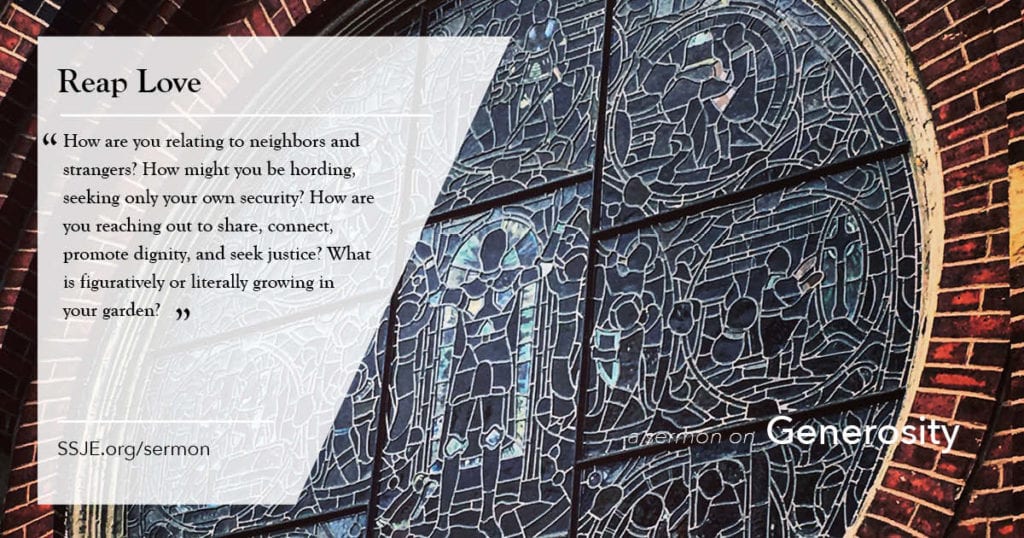 The garden is in partnership with Nourishing the North Shore. We provide the land and water. They grow, harvest, and distribute. We also host land for the Organic Community Garden. We Brothers share in Nourishing the North Shore’s mission: “to ensure equal access to healthy, local food to all members of the North Shore communities in a manner that builds community, fosters connection, and promotes dignity and self-reliance.”[ii] Food justice is expanding step by step in further work with local schools and with a bigger garden: mission in action.

A bigger garden could be used for exclusion and greed, to horde and squander. In today’s text, the prophet Hosea shows bad and good images. God’s people were like “a luxuriant vine that yields its fruit.” With more fruit, they built monuments to idols, like self-praise, ignoring God. “Their heart is false … The Lord will break down their altars, and destroy their pillars.” END_OF_DOCUMENT_TOKEN_TO_BE_REPLACED 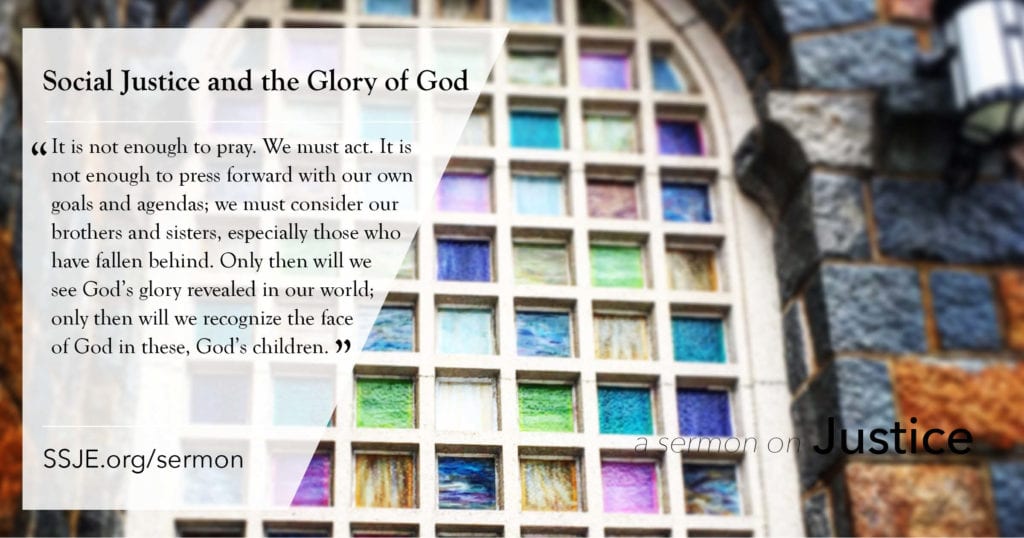 The green vestments and altar frontal indicate that we have moved into what the Church calls “ordinary time.”  But in spite of the change of color, we haven’t left the season of Epiphany completely behind.  This is the Fifth Sunday after Epiphany and in just two weeks, we will conclude the season of Epiphany with the celebration of the Feast of the Transfiguration, in which the disciples see the glory of God in the face of Jesus Christ when they are with him on the mountain.  So the theme of Epiphany – the revelation of the Divine Nature in the person of Jesus – is still present in our appointed readings for today.

Why, then, do we have this sober passage on fasting from the book of Isaiah?  What does this passage on social justice have to do with Epiphany?

If we take a closer look at this passage and its context, we may begin to understand the connection between social justice and the revelation of the Glory of God.

Over time, the majority of biblical scholars have come to recognize in the book of Isaiah three distinct parts, which some have conveniently labeled “First Isaiah” (referring to chapters 1-39), “Second Isaiah” (consisting of chapters 40-55) and “Third Isaiah” (chapters 56-66).  “First Isaiah” is sometimes referred to as the “real” Isaiah because it is grounded in the age in which the prophet actually lived.  “Second” and “Third Isaiah” describe later periods and, scholars tell us, have been added to the original text.  “Second Isaiah” is written during the time of Israel’s captivity and describes the vision of the New Israel which God was to establish after the return of the people from their exile in Babylon.  “Third Isaiah” – from which today’s reading is taken – reveals that this glorious vision did not materialize as anticipated, and expresses the disappointment of God’s people.  God had delivered them from their captivity in Babylon, but Israel had not been restored to its former glory, as had been expected.  They were back home, but their home was in shambles.  To adopt the campaign slogan of a certain U.S. President, how could they make Israel great again?

END_OF_DOCUMENT_TOKEN_TO_BE_REPLACED

He also told this parable to some who trusted in themselves that they were righteous and regarded others with contempt: 10‘Two men went up to the temple to pray, one a Pharisee and the other a tax-collector. 11The Pharisee, standing by himself, was praying thus, “God, I thank you that I am not like other people: thieves, rogues, adulterers, or even like this tax-collector. 12I fast twice a week; I give a tenth of all my income.” 13But the tax-collector, standing far off, would not even look up to heaven, but was beating his breast and saying, “God, be merciful to me, a sinner!” 14I tell you, this man went down to his home justified rather than the other; for all who exalt themselves will be humbled, but all who humble themselves will be exalted.’

I’ve sometimes wondered what it would have been like to have seen Jesus in person, but I’m not sure I would have always enjoyed being part of his audience. END_OF_DOCUMENT_TOKEN_TO_BE_REPLACED