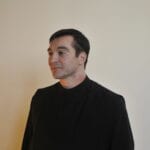 I stood patiently by the door, waiting to be told where to sit. I saw all my Brothers take what I thought was their designated seat. It was my first time at “rounds” (what we Brothers call our daily morning meeting: that time where all the Brothers are in the same room at the same time to talk over the day’s business face-to-face).

I kept waiting to be told where to sit. I felt like a stray dog who had just been adopted days before, trying to figure out the ways of the household, not wanting to cause a stir, just looking to obey. Eventually I realized no one was going to tell me where to sit, and so I just sat down in an empty chair. I kept waiting for one of my elder Brothers to look at me and explain kindly but firmly that I was sitting in a chair that another Brother had been sitting in for longer than I had been alive. Luckily that never happened.

I went through thousands of moments like that in my early days as a Postulant: long moments of waiting for someone with authority to swoop in and tell me exactly what to do. It took me a long time to realize that was not the way authority was exercised at SSJE. Those in power were not going to tell me where to sit. Instead, those in authority were focused on having a productive morning meeting and getting through the day. This was a big difference from the days back when Novices had their mail read.  END_OF_DOCUMENT_TOKEN_TO_BE_REPLACED