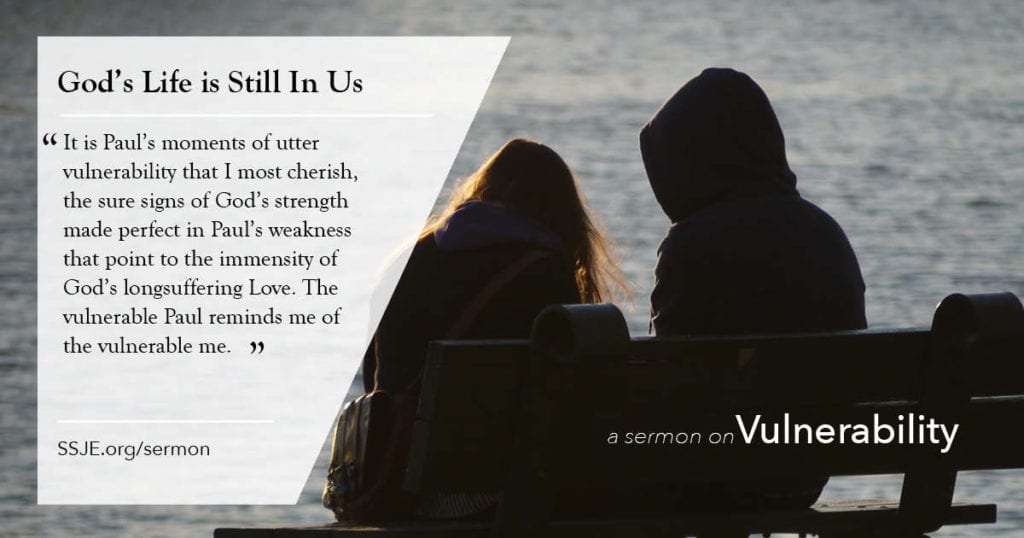 There is a common physiological phenomenon that occurs to many people as their bodies cross the threshold from a waking state into deep sleep. An involuntary twitch of the muscles, called a hypnic jerk, wrenches the body awake. This is often preceded by a distinct sensation of falling that can be quite horrifying. Scientists don’t really understand it. It may be that our daytime motor control is exerting a last burst of effort for dominance as our muscles enter full relaxation on the cusp of dreaming.  It may even be an evolutionary echo: our brain mistakes this necessary muscle relaxation for the experience of falling out of a tree, and sends a sudden flash of warning to the body. Whatever the cause, there is something deep, something primal in us, that resists relinquishing control as we approach the mysterious, nightly death of sleep.

In tonight’s passage from Acts, we hear about a boy named Eutychus and an unexpected fall. Eutychus falls asleep and falls to his death from a third-floor window. This tragic accident interrupts the bigger story with a profusion of small details. It happened “On the first day of the week, when we met to break bread,” Luke writes. The furniture is different, but we have been here before. Paul breaks open the word in an upper room in Troas, just as Jesus did in Jerusalem on the night before he died, and again after his Resurrection. Paul’s destination, too, is Jerusalem. As the gravity of his self-offering becomes clear, the power of the Lord’s resurrection flashes forth within and around him. END_OF_DOCUMENT_TOKEN_TO_BE_REPLACED 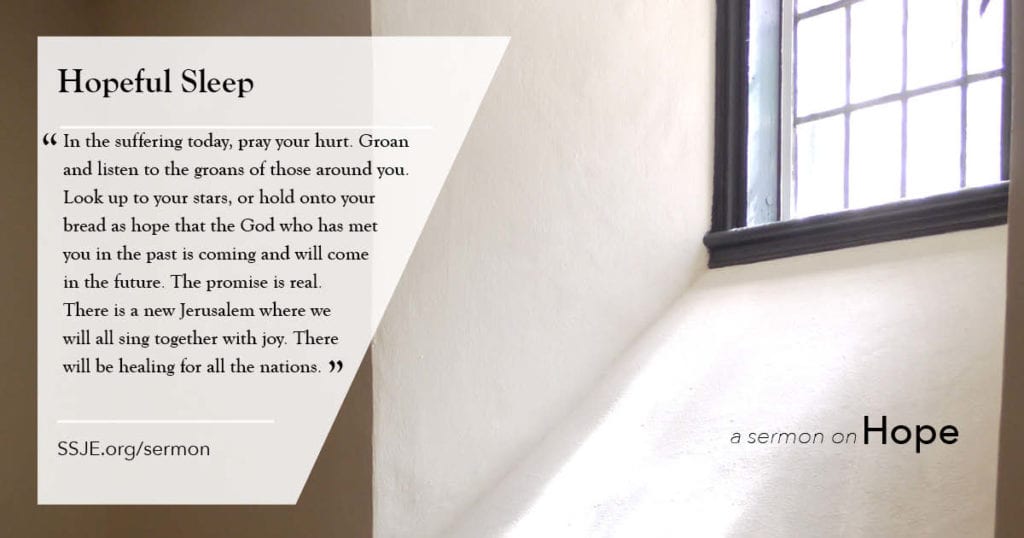 “Let me hear thee softly speaking;
in my spirit’s ear whisper: ‘I am near.’ …
voice, that oft of love hast told me;
arms, so strong to clasp and hold me;
thou thy watch wilt keep,
Savior, o’er my sleep.”[i]

We have just sung this prayer for sleep and God’s safe-keeping. How is your sleep these days? Many of us are more tired from the stresses of our present suffering: changed work, isolation and separation, the pandemic increasing, so much death and loss, cries of injustice, racism and privilege further exposed. When is change? Where is healing? How do we sleep at a time like this?

Paul in his letter to the Romans acknowledges suffering. In today’s text he speaks of us groaning and not just us but all of creation, groaning as in labor pains, waiting for restoration in a new birth. He also speak of hope, of that which is not seen. What does having hope look like? Especially when we’re groaning, and when it is hard to sleep?

Earlier in chapter 4, Paul wrote about Abraham as one who “hoping against hope … believed that he would become ‘the father of many nations,’” as God had said, with numerous descendants.[ii] Abraham believed despite overwhelming contrary physical evidence. Abraham was about 100 years old, and Sarah, his wife, was barren. Abraham was “fully convinced that God was able to do as promised.”[iii] Paul quotes Genesis 15 which says Abraham’s faith “‘was reckoned to him as righteousness.’”[iv] Remember what happened at that reckoning? END_OF_DOCUMENT_TOKEN_TO_BE_REPLACED