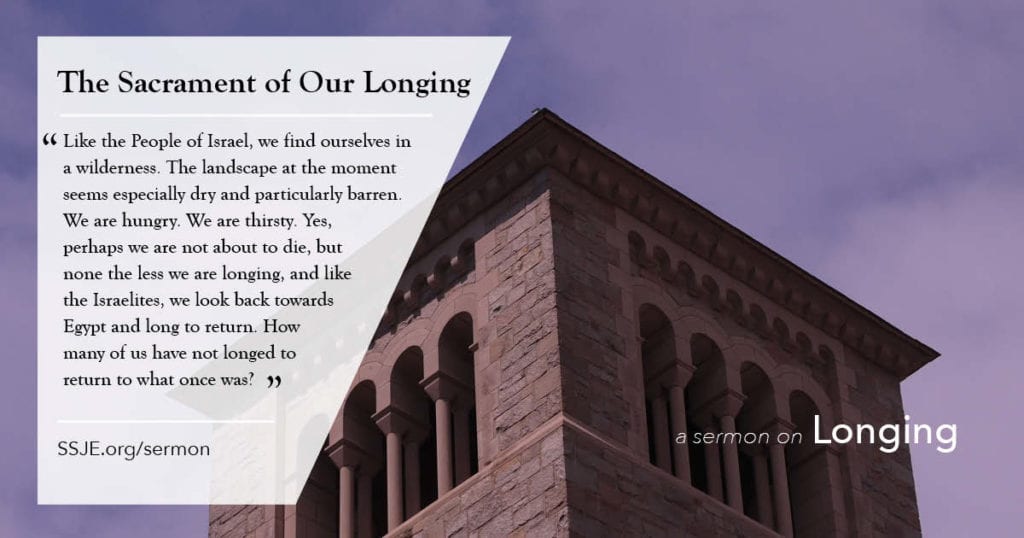 There hadn’t been anyone there. At least there hadn’t been anyone there when I looked out the window as the coach pulled to the side of the road and slowed to a stop. There hadn’t been anyone there, as all 30 of us got off to stretch our legs. But suddenly people began to emerge from the barren landscape. At first, it was a young boy, and then a couple of other children. One or two adults came into view. Soon the whole community was there. Fires were laid. Tea was made. Various goods for sale were displayed on blankets spread out on the ground. As we drank our tea, we were invited to buy what was being offered for sale. If I remember correctly, I did but something, but now can’t remember what it was.

I was in the wilderness. It was the fall of 1998 and I had gone with a group of pilgrims from St. George’s College, Jerusalem, to Egypt. We had spent a few days in Cairo, and then made our way to St. Antony’s Monastery, the home of a thriving community of Coptic monks located in the place where monasticism began with St. Antony. We where now in the Sinai on our way to St. Catherine’s Monastery, located at the foot of the mountain where tradition tells us that Moses encountered the Burning Bush[1], and then later received the Ten Commandments[2], and where Elijah had heard the still small voice and knew it to be God.[3]

Just as you would imagine, the landscape was barren and harsh, especially when the sun was at its height. Rocky outcrops seemed to be everywhere, and while there was evidence of plant life, it seemed mostly to be scrub, not much good for anything. But somehow, somewhere, this community of people seemed to make a living, tending their flocks, and no doubt doing what they were doing that day when I met them: appearing out of no where to offer strangers tea, and an opportunity to buy a few souvenirs. Clearly, they lived somewhere, but there was no evidence of village, or camp. There was certainly no sign of water.    END_OF_DOCUMENT_TOKEN_TO_BE_REPLACED

The metaphor of thirst is used throughout the Gospel of John to characterize the believer’s relationship to the spirit. Whoever comes to me, Jesus says, will never be thirsty, for, “Out of the believer’s heart”, or as the Greek renders it, out of the believer’s belly, “shall flow rivers of living water.”(1) Yet, Jesus himself cries from the cross in his final hour, “I thirst,” suggesting, perhaps, that this side of the grave our deepest longing – our thirst – for wholeness, for union, for belonging, will not be quenched. END_OF_DOCUMENT_TOKEN_TO_BE_REPLACED