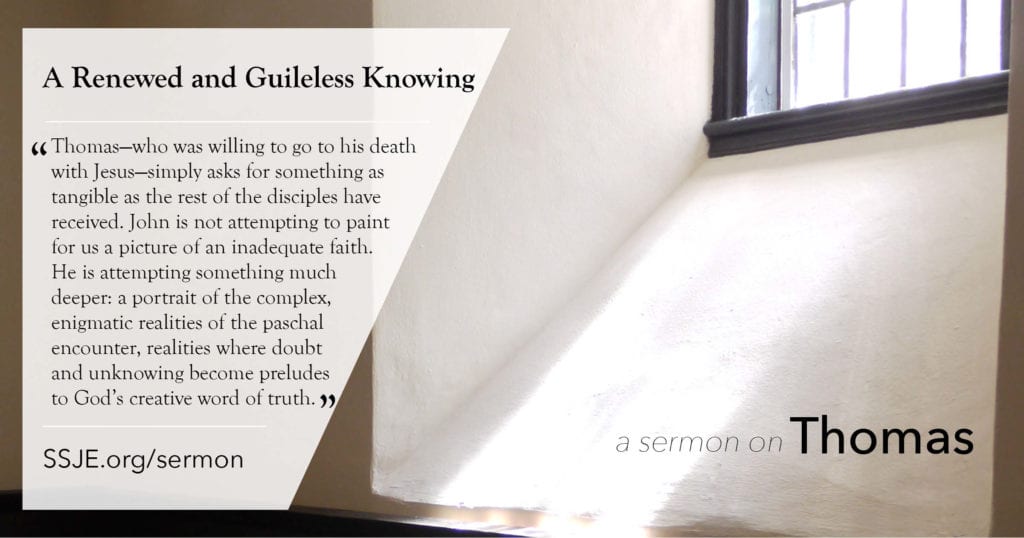 Today is perhaps my favorite Sunday of the year. It is known by a variety of names, depending on one’s tradition: Divine Mercy Sunday, Low Sunday, Pascha Clausum, The Octave of Easter, Empty Pew Sunday or, as it is still known among my more incarnational friends from theological school, Side-Wound Sunday. Our Roman Catholic brothers and sisters have frequently called this day Quasi modo Sunday, after the first line of the Introit traditionally sung at the beginning of Mass on the Second Sunday of Easter: Quasi modo geniti infantes, alleluia. “As newborn babes, alleluia, desire the rational milk without guile, alleluia, alleluia, alleluia.”[1]

Today the divine gift of mind mixes and comingles with the gifts of flesh and blood; and an encounter with the Risen Lord offers us the new milk of a renewed, guileless knowing. As the risen and glorified body of Jesus meets His broken and weary disciples, so too our weary rationality meets and is gathered up into the reality of the Paschal Mystery. Today we remember that when the faithful doubt in love, God prepares a spring of faith, “gushing up to eternal life.”

When the disciples report to Thomas that they had seen the Lord, he baulks. Unless I see the mark of the nails in his hands, and put my finger in the mark of the nails and my hand in his side, I will not believe.[2]A twin,[3]Thomas is likely well acquainted with the liabilities of mistaken identity, and John begs us not to hear this as a faithless objection. Chapter twenty of John’s gospel contains three encounters with the Risen Lord, and in each of these encounters, the characters perform poorly. Mary only recognizes Jesus after He speaks her name; gripped by fear, the disciples lock themselves away; and Thomas—who was willing to go to his death with Jesus in chapter eleven—simply asks for something as tangible as the rest of them have received. John is not attempting to paint for us a picture of an inadequate faith. He is attempting something much deeper: a portrait of the complex, enigmatic realities of the paschal encounter, realities where doubt and unknowing become preludes to God’s creative word of truth.

This morning we hear one of the most quintessential stories in all of the gospels; so definitive in fact that it has given birth to a term that is used to label a person we deem as a skeptic.  When someone we know is unwilling to believe something without concrete evidence, we call them a ‘doubting Thomas.’  Beginning with Easter Day we hear an abundance of post-resurrection stories witnessing to the disciples and those close to Jesus seeing, speaking, and eating with Him, giving credence to the fantastic rumors that His body had not been stolen, but that He had in fact risen from the dead three days after his gruesome crucifixion, just as He had prophesied.  Our lection from John begins with one of these accounts:  it is the first day of the week following the crucifixion and Jesus’ disciples have hidden themselves behind locked doors out of fear for their lives.  Jesus appears among them bidding them peace, and then he immediately shows them his hands, feet, and side: the wounds that were inflicted on him to assure his torture and resulting death.  John says: ‘Then the disciples rejoiced when they saw the Lord.’

But the gospel writer says that one of them was missing:  Thomas, who was called ‘the twin.’  Where was Thomas?  Was he out surveying the scene, plotting a safe exit from Jerusalem for the others?  Was he discreetly purchasing food and other provisions that they needed?  We don’t know, all we can surmise is that Jesus’ disciples were hiding in fear and that Thomas was not with them.  Considering the little we know about Thomas, this is not altogether surprising.  There seems to be an implicit bravado associated with him.  Earlier in John’s gospel, it is Thomas who exclaims “let us also go [with Jesus}, that we may die with him,” demonstrating that Thomas was utterly devoted to Jesus at the most, and at a hothead at the very least.[i] END_OF_DOCUMENT_TOKEN_TO_BE_REPLACED

The Apostle Thomas has been caricatured as “doubting Thomas,” but that’s unfair, and it’s inaccurate.  I think the opposite is true.  Thomas is heroic and exemplary.  There are two scenes in the gospels prior to what we’ve just read that shed light on Thomas.  One is when Jesus was trying to say “good-bye” to his disciples, just prior to his being seized in the garden at Gethsemane.  Jesus said, “Let not your hearts be troubled….  I go to prepare a place for you… and you know where I am going….”   No.  Not so.  Not at least for Thomas.  It seems only Thomas had the courage to admit that he is clueless.  “My Lord,” Thomas says, “We don’t have the slightest idea where you are going!  How can we know the way?”[i]  (It’s a good question; an honest question for us, too.  How can we know the way, especially when the path is dark and the risks are many, and the fear is great, and the route is unsure?)   How can we know the way?