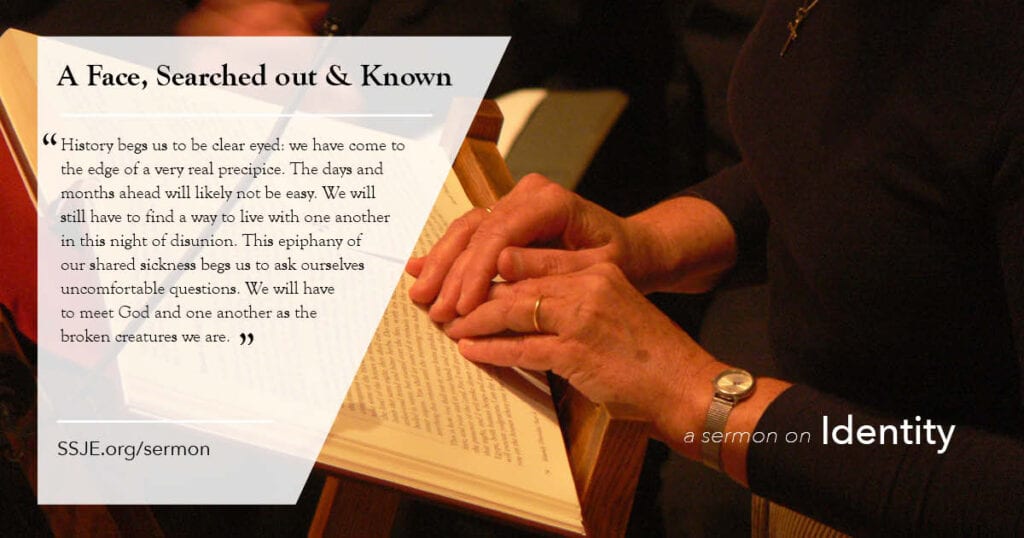 From the time I first encountered it in earnest, this season of the church year has always spoken to me of identity. In particular, the play between the way we see our identities and the way God sees our identities.

On January 6, the Church kept the Feast of the Epiphany of Our Lord Jesus Christ, celebrating the manifestation of God to the world in Jesus. As she did, she called to mind (at least in the western rites) the story of the visit of the Magi to the infant Jesus. A story about an identity: the fullness of God’s identity, present in the frailty of a defenseless, dependent child.

As she kept the Feast of the Baptism of Christ on the Sunday that followed, she recalled yet another story about identity: the human identity into which God desired to be baptized in the flesh of Jesus beneath the waters of the Jordan River. The humanity into which Righteousness itself was pleased to be plunged and drowned. The humanity with which, by that act, God became unmistakably and eternally bound.

These two feasts are recognized in the lectionary as solemnities. They can sometimes pass us by in the daze that follows the whirlwind of Chistmastide, but they frontload the season of Epiphany with these themes of identity. I find it a grace that the lectionary does this in this way. And this year in particular. For as the Church celebrated the display of God’s presence in the world before the Gentile Magi on January 6, her eyes beheld a different kind of epiphany as violence swept through the Capitol. It was an epiphany of the very brokenness and division into which God deigned to be submerged. END_OF_DOCUMENT_TOKEN_TO_BE_REPLACED 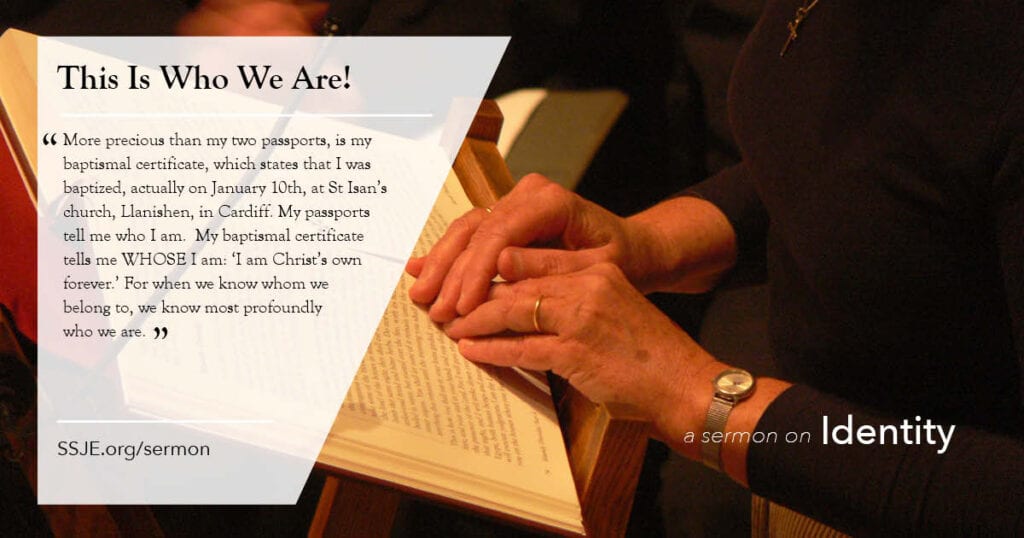 The Baptism of Christ

I have a box in my room where I keep all my precious documents. You probably have something similar. These documents, such as passports, birth certificates, ordination papers, for many, marriage certificates, these documents are all very precious because they tell us what we belong to and who we belong to. That’s incredibly important, because belonging gives us our sense of identity. These documents remind me of who I am. Among the most precious of documents for me are my two passports. Whenever I hold these passports I have an enormous sense of gratitude to God that my own life, my very identity, has been formed by the traditions and values of two different nations.

Our core identity is intimately bound up with the values of the country to which we belong; so, when we see these values violated, as we have seen on Capitol Hill during these past days, we feel a visceral shock to our very core.

Belonging and identity are so bound together, that an even worse experience is to actually have your ‘belonging’ taken away. I will never forget a time of ministry some years ago in South Dakota, when I spoke with some elderly native Americans who told me the harrowing story of how they had been made to leave their ancestral lands and at school were forbidden to speak their native language. ‘We don’t belong here anymore’ they said. How terrible to belong nowhere and belong to no one. Those sad and haunted eyes we have seen on the TV of refugees, thrown out of their country, ‘cleansed’ or fled in terror from their homes and from a country where they are told they don’t belong. END_OF_DOCUMENT_TOKEN_TO_BE_REPLACED 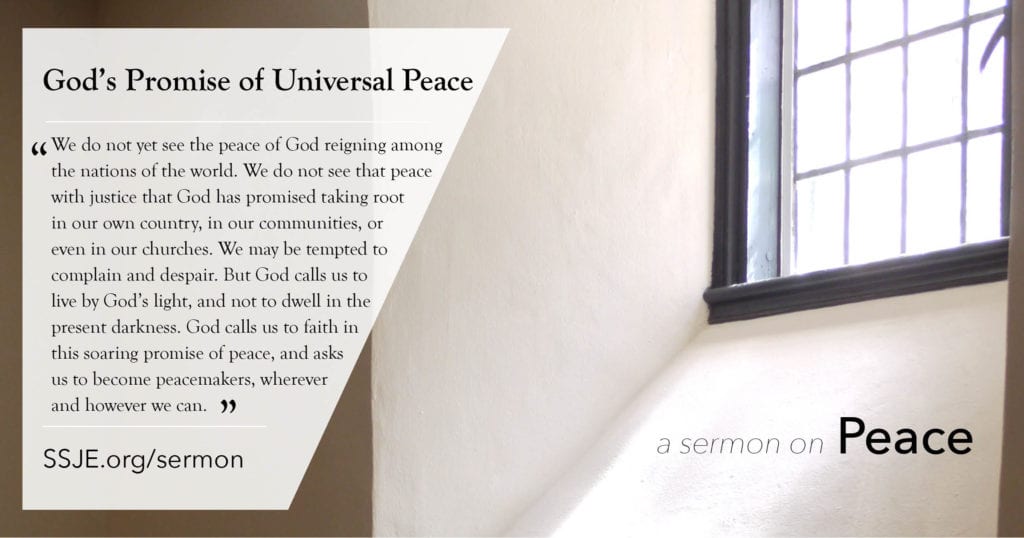 Today is the first day of Advent, the beginning of the Church’s calendar year.  The lectionary gives us a great gift when it begins the year with this short passage from the book of Isaiah: Isaiah 2:1-5.  Here we read the account of a vision given to Israel’s greatest prophet.  Isaiah sees a mountain – “the mountain of the Lord’s house” – raised high above all other mountains.  And to this place, he tells us, “all the nations” shall stream.  They will say to one another, “Come, let us go up to the mountain of the Lord, to the house of the God of Jacob, that he may teach us his ways and that we may walk in his paths.”

The mountain Isaiah refers to is, of course, Mount Zion, on which stood the Temple, the dwelling place of God on earth.   The revelation given to Isaiah in this vision is that this mountain – “the mountain of the Lord’s house” – will be a source of wisdom and right judgment for all people.  The Law of Moses, given initially to the people of Israel, will instruct all the nations in the ways of God and teach them to walk in God’s paths.  The result of this will be universal peace, the promise of peace with justice, which will allow humankind to “beat their swords into ploughshares, and their spears into pruning-hooks,” so that “nation shall not lift up sword against nation, neither shall they learn war anymore.” 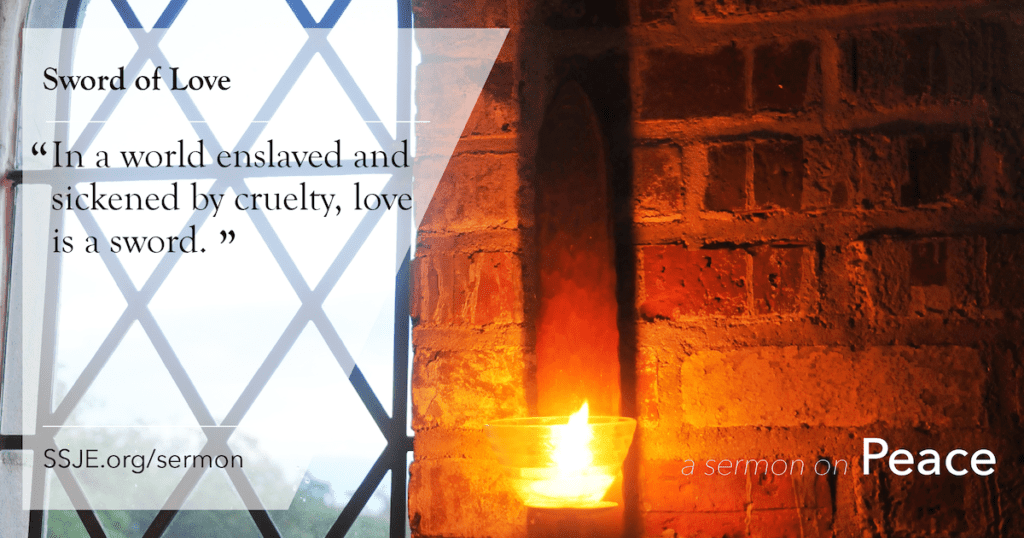 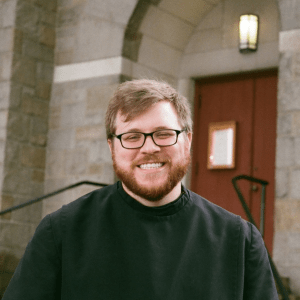 “They begged him to leave.” With this, the townsfolk in today’s Gospel reading confess that there are more than two demoniacs among them.

Jesus comes to the country of the Gadarenes and encounters two men, possessed. He rebukes the powers that ensnare the men, allowing them to flee into a herd of pigs. The animals are driven mad and throw themselves into the water to drown. This terrifies the swineherds, who rush into town, recounting the whole story. At this, the townspeople come out to meet Jesus, and beg him to leave.

This story is consistent with Christ’s promise to bring not peace, but a sword. Christ is a calmer of storms for the afflicted, but a harbinger of upheaval for communities built on and preserved by sin. By begging Christ to leave, the people have preferred livestock to humans. They have preferred to abandon and exile the afflicted, selling their neighbors to purchase stability. For the sake of peace, they have preferred pigs to men. But this is a false peace, a veneer that serves to obscure the brutality of their society. And it is into this peace that Christ, God’s right hand, thrusts his sword. END_OF_DOCUMENT_TOKEN_TO_BE_REPLACED

On this Holy Innocents Day, my mind goes back to Salisbury Cathedral where I was ordained.  The cathedral is twinned with Chartres Cathedral, and the year after my ordination a huge new East window was put into Salisbury – an incredibly beautiful and powerful window, made in Chartres at the famous workshop of Gabriel Loire – and incorporating that marvelous blue so characteristic of Chartres.  The window is called “Prisoners of conscience” and it was dedicated by Yehudi Menuhin, who had worked so tirelessly for Amnesty International. END_OF_DOCUMENT_TOKEN_TO_BE_REPLACED

It’s been a very long week. How many different emotions we have experienced, from the shock and horror of the bombings on Monday, the profound sadness and grief for those who lost their lives or were so terribly injured, to the growing anxiety as the police identified the two suspects, and then the days of tracking them down, culminating in the weird, almost surreal experience of Friday’s lockdown of the city, and the final relief when the second suspect was arrested on Friday night.

You will each have your own thoughts and experiences of Friday: being locked down, unable to go out. What I remember most vividly was having to lock the door of the Chapel. And then all though the day, the Brothers and our guests worshipping here together, with the door locked – and always just audible from outside, the eerie, unsettling sound of sirens. END_OF_DOCUMENT_TOKEN_TO_BE_REPLACED

Preached the Day after the Boston Marathon Bombings.

Every year it strikes me, as if for the first time.  On December 25 we celebrate the wondrous story of the birth of Jesus.  We meditate on the coming of the Prince of Peace.  We gaze adoringly at the crèche, at the Holy Family – the love between Mary and Joseph and their beloved child. END_OF_DOCUMENT_TOKEN_TO_BE_REPLACED