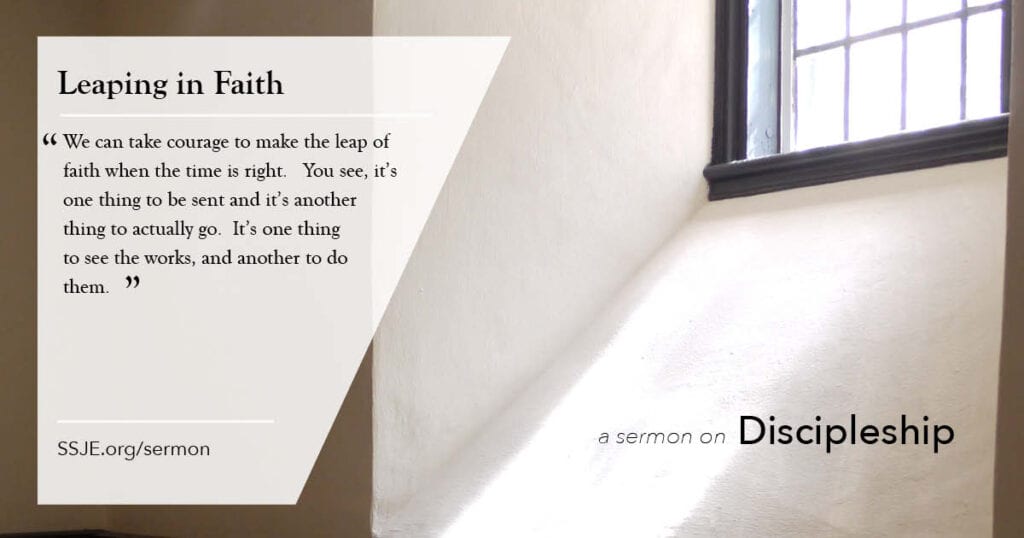 One of my favorite places on the playground at school was the swing set.  Today, I still enjoy the gentle sway of the swinging bench in the cloister garden.  But, back then, I was interested in a more high-octane version of swinging.  I loved to push faster and higher to see how high I could get.  I tried on several occasions to swing all the way over the bar and have always been disappointed that physics just weren’t on my side in that endeavor.

As much fun as the swinging itself was, I also discovered the excitement of the dismount.  You could just let yourself come to a gradual stop, or drag your feet on the ground to slow things down quicker.  Or, you could time it just right and jump!  The thrill of being propelled into the air and landing what felt like several yards away was such a rush!  But it took a fairly careful calculation to get it just right.  Too soon and I’d skid to a halt and faceplant in the gravel, which happened.  Too late and I’d just kind of fall straight down and crumple to the ground, which also happened.  The best was when I was when I found that sweet spot and launched in a graceful arc and touched down like an eagle.  I had to be ready, I had to have momentum, and I had to have the courage to make the leap.

We remember two apostles today, by definition two who were “sent.”  We know a few things about Philip and James, we know less…  James was the son of Alphaeus and he is always listed among the twelve.  Tradition has distinguished him from James the Great, the son of Zebedee, and it’s unclear if he is the same James as in the book of Acts, son of Clopas, the so-called brother of Jesus.  But, his relics arrived from the East in Rome at the same time at St. Philips and so they have been joined in remembrance. END_OF_DOCUMENT_TOKEN_TO_BE_REPLACED